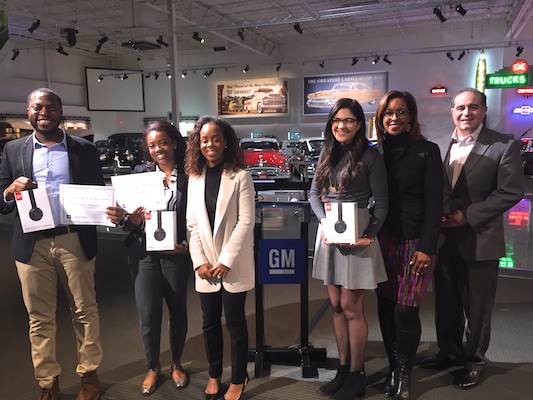 General Motors launched its second annual Discover Your Drive diversity journalism program Jan. 7-11, hosting 13 college students and nine journalists from across the country at Detroit’s North American International Auto Show. Students from diverse backgrounds participated in the program, which promotes diversity in automotive journalism and news coverage.  Hispanic Lifestyle was proud to participate in the program.  We are pleased to share that our group of students,  Rushawn Walters and Nia Muhammad, both of Howard University, and Sarah Rahal, of Wayne State University, won the prize with “Jammin’ with GM,” a video story told through carpool karaoke, focusing on the all-new Chevrolet Cruze and technologies such as Apple Car Play, Android Auto, Teen Driver, Rear Seat Reminder and the car’s fuel economy.

“As an aspiring student journalist from Detroit, getting the opportunity to learn more about what’s in my backyard was a priceless gift,” said Rahal. “This program gave me a network of people that are proficient in the industry and the knowledge to use it in the field. Discover Your Drive allowed me to believe that automotive news is a possibility for my future.”

Discover Your Drive began Saturday and concluded Wednesday with an awards presentation recognizing students for their work at NAIAS as well as their social media presence during a scavenger hunt through Detroit. Students used the new, award-winning all-electric Chevrolet Bolt EV, named 2017’s NAIAS Car of Year, and OnStar technology to find their way around the city. They posted about their adventures on Twitter tagging @GM_Diversity using the hashtag #DiscoverYourDrive.

“We were blown away by the talent and creativity of these fearless students,” says Leslie Gordon, senior manager, GM Diversity Communications. “Many of them had not been exposed to automotive journalism, had never been to Detroit or seen snow. But they brought with them the right amount of curiosity required to cover an event as massive and complex as the North American International Auto Show and they did so with grit and class.”

One student demonstrated that drive by chasing a face-to-face interview with GM Chairman and CEO Mary Barra on the auto show floor. Another coaxed GM North America President Alan Batey into a video that won the program’s top prize: an all-expense paid trip to a national journalism conference.

Students attended news conferences and vehicle reveals, explored the auto show floor and interviewed auto experts. The professional journalists mentored the students and helped them produce news stories and presentations. The program ended with an awards ceremony at the GM Heritage Center in Sterling Heights, Michigan.

“As a diversity and business reporter, it’s really great to see GM put its money and weight behind discovering and helping young journalists of diverse backgrounds get started with their careers,” said Inc.’s Rodriguez, also a mentor.

“This is the most original experience for college students that encourages them to consider automotive journalism while also promoting diversity in newsrooms,” he said. “By diverse, I mean not only diversity in one’s ethnicity but also in ideas and a promise from everyone involved to protect and uphold journalism’s existence and the profession’s commitment to tell accurate and honest stories.”