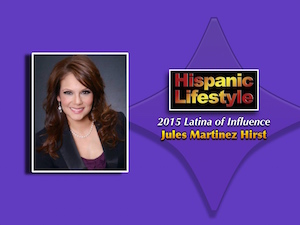 Jules Martnez Hirst is a 2015 Latina of Influence named by Hispanic Lifestyle. Jules is being recognized for her passion to educated our community in the area of social etiquette.  In this segment Jules talks about her background and shares an etiquette tip. Hispanic Lifestyle’s 2015 Latinas of Influence will be recognized during a luncheon held in their honor on at Latina Conference 2015.

Jules Martnez Hirst is a sought-after business & social etiquette expert, co-author of The Power of Civility and founder of Etiquette Consulting, Inc.

Dedicated to empowering individuals and groups with confidence and essential social grace, she conducts lectures, workshops, seminars and webinars for business professionals, college students, the youth and brides to be.

Jules has recently partnered with Honor Courage Commitment, Inc to give Dining and Networking etiquette to the participants of the 22Fellows Program where sixteen veterans will learn and apply principles on how to be successful and thrive in entrepreneurship, social entrepreneurship and community development. Their goal is to create job creators and not job seekers. She has volunteered with L.A.’s Prom Closet’s A Dress To Remember event conducting dining etiquette workshops for underprivileged junior and senior high school students, who are attending the prom for the first time.

Regarded as a foremost authority in business etiquette, Jules has been interviewed by and quoted in a variety of media outlets including NBC Nightly News, ABC World News, Yahoo!, Bravo T.V, MTV, the San Diego Tribune, The Smart Show, KNX 1070, Marketplace PR and Tech Goes Strong.