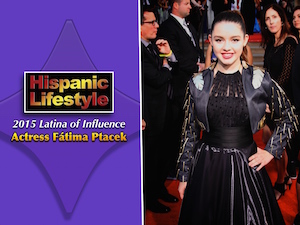 Fátima Ptacek is a 12-year-old actress best known for her role as Dora in the Emmy Award winning series Dora the Explorer, which airs on the Nickelodeon television network. She has been in that role since November 2010.

Fatima Ptacek on the Red Carpet at 2014 Alma Awards

Fátima’s film career began early in 2009 when she was cast alongside Catherine Zeta Jones in the comedy The Rebound. After landing supporting roles in several other films, she was cast in lead roles in four feature films due to be released in 2013, including A Little Game, Anything’s Possible, Tio Papi and The Miracle of Spanish Harlem. She has also appeared in TV shows, such as SNL, Sesame Street (where she appeared with First Lady Michelle Obama), A Gifted Man, Body of Proof, The Beautiful Life and Royal Pains. Fátima made her stage debut in 2010, receiving critical acclaim for her portrayal of a deeply disturbed girl in the Off Broadway play Love Divided By / Times Three. Since launching her acting career in 2006, she has also appeared in 70 television commercials. She is represented exclusively by Abrams Artists Agency.

Fátima is also an accomplished fashion model whose face has graced magazine covers and billboards around the world; she can be recognized in dozens of ad campaigns and in high fashion work; and she’s walked the runway at such venues as New York’s annual Fashion Week. Aside from her work in New York, Fátima has had memorable shoots in Paris, Iceland, Los Angeles, Miami, and at various site along the east coast of the United States.

In her personal life, Fátima, who resides with her parents and siblings in New York and attends an academy for intellectually-gifted children, is a competitive gymnast competing at USAG Level 7 and an accomplished equestrian. She is an avid reader, has a passion for culture and international travel, and loves to participate in charitable causes. Fluent in English and Spanish, Fátima is studying Mandarin Chinese.