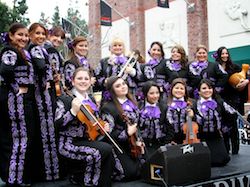 Collectively representing over 10 countries, the Grammy Winning Mariachi Divas and one of Hispanic Lifestyle’s 2013 Latinas of Influence.