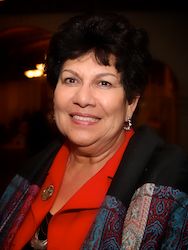 Ofelia Valdez-Yeager was born in Tayoltita, Durango, Mexico. She moved to Tijuana in 1953 where her family of ten waited 5 years for her father to earn enough money in the United States to buy a home in Montebello, California. She began her schooling in the first grade speaking no English and finishing that first year at the top of her class. Although her parent’s education was limited to the 3rd and 6th grade in Mexico, they always held very high expectations for grades and encouraged her and her brothers and sisters in academic endeavors.

Ofelia entered UCR in 1965 with the first group of five EOP students. She was mentored well, worked hard and graduated with a BA degree in Spanish in 1969. She earned her elementary teaching credential in 1971.

Ofelia’s volunteer commitments took her to leadership positions in Little League and PTA and in several community organizations through their committees and boards. She was elected to the Riverside Unified School district Board of Trustees in 1992; her first publicly elected position and the first Latina ever elected to the local school board. She went on to serve as its Vice President and to extend her city commitments with a part-time position as administrative assistant to the Mayor, focusing on youth, education and crime issues. She also served as the Executive Assistant to the Superintendent of Riverside Unified School District. Ofelia now works as the Chief Administrative Liaison to the Riverside County Superintendent of Schools. She continues to serve on numerous boards and committees of local agencies and human service consortia.