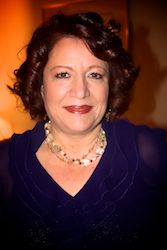 About our Latina of Influence – Susan Sifuentes Trigueros

Susan Sifuentes Trigueros is a regional corporate leader with a long history of advocating for Latinas and the Latino community. She is a highly respected Government & Public Relations professional with over twenty years of experience in corporate, governmental, community and media relations. Susan joined Southern California Gas Company (SoCalGas) in 1982 and eventually became one of the first Latinas in the External Government Affairs department.

Susan is currently the Regional Public Affairs Manager managing 9 staff members responsible for government relations, charitable community giving and media strategies for the SoCalGas region of Los Angeles County. Southern California Gas Co. has been delivering natural gas to its customers for more than 140 years. It is the nation’s largest natural gas distribution utility, providing service to over 20 million consumers in more than 500 communities encompassing approximately 20,000 square miles throughout central and Southern California, from Visalia to the Mexican border.

Some of Susan’s professional and personal highlights supporting the Latino community are a result of her service to numerous significant organizations as a hands on leader which include the National Association of Latino Elected Officials (NALEO); MALDEF the nation’s leading Latino legal civil rights organization. MALDEF is often described as the “law firm of the Latino community”; TELACU a pioneering institution committed to service, empowerment, advancement and the creation of economic self-sufficiency within the Latino & other minority communities; the Mexican American Opportunity Foundation (MAOF) which provides socio-economic betterment opportunities & preserves the values and heritage of the Mexican American culture; the Southwest Voters Registration Project; her alumni the University of Southern California (USC) Latino Alumni Association and HOPE (Hispanas Organized for Political Equality)

During Susan’s tenure as President of HOPE the organization hired its first full-time executive director and launched the HOPE Leadership Institute which to date has graduated over 400 Latina civic leaders and the founded the “Youth Leadership through Literacy Program”.

Susan spearheaded HOPE’s “Corporate Track” a work that brought a brightly lit focus to the status & successes of Latinas in Corporate America.

Susan served as Chair of the USC Latino Alumni Association and was instrumental in raising approximately 2 million dollars of the goal to establish a permanent 5 million dollar endowment.

Susan is proud of receiving the Corporate Award for her support of the mentoring program “Girls Today, Women Tomorrow” which empowers girls to create their own opportunities for life success through actively contributing to their community.

Susan and her husband Mario are the proud parents of seven children and three grandchildren.