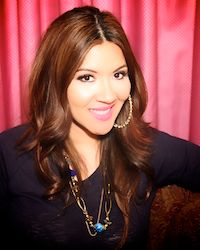 In her own words,
As a young Salvadorena, born Raquel Cordova went from Hollywood Dreams‚ to living her dream!! This is how it all began: My parents Mauricio and Cecilia welcomed their third (and last) child to their young family, a beautiful baby girl whom they named Raquel-Me!! I am the youngest of three and eager to meet me at home was my sister Susie (6) and my brother Joey (3). With the family quickly expanding my parents packed their belongings and off we were to our new home – Rubidoux, CA where I spent the next 17 years of my life. Growing up I’d say my family was a middle class Latino family. Both of my parents worked to provide a modest household for my siblings and me. I grew up in a 4 bedroom track home where every other house looked just like ours. I have such great memories of playing in the neighborhood with my friends as a little girl, skating and riding my bike or getting rides on my brother’s mot-ped to the dairy across the street from my house. Yes I said dairy! Cows and all!! My childhood was happy and festive and I believe that is why I am who I am today.

As a little girl, I remember telling everybody that I would be in entertainment one day. Every chance I got I was dressed up in my mom’s high heels and accessories. I was the little girl putting on shows at the parties, singing and dancing! Even as a child I loved the feeling of getting a crowd going and I was aware of the energy I got in return. Such a rush! I am so blessed that not once did I hear “Stop dreaming!” or “You need to be a doctor or a lawyer instead!” On the contrary, what I got from my family, my parents especially was “Really mi hija? Wow! Remember you can be anything you want to be as long as you work hard and never quit.” Well guess what? That’s exactly what I did! I knew at a very young age what I wanted for MYSELF. My goals and dreams have always been clear and with the love and support of my family-always attainable!! As a teenager, my priorities were always a little off from that of my friends. While many of them fell into the traps of drugs and pregnancy, I remained focused. I studied and received good grades and waited patiently for the day to come when I could leave Rubidoux behind and chase my dreams full speed ahead-VAMONOS!! Shortly after graduating from Rubidoux High School, I moved to the Los Angeles area where I began interning for Power 106.

I did not know that it would be a life changing experience for me! I knew I wanted to be in the entertainment industry; however I thought I wanted to be an anchor woman for a news channel or something along those lines. Well that quickly changed. Working under the guidance of Jeff Garcia at Power, my eyes were opened to this wonderful; exciting profession I now proudly call my own-On air radio personality. I knew I had a lot to learn to be considered good, but good wasn’t good enough for me… my goal was and still is to be great! I also understood pursuing my dream would take plenty of effort on my end. I was ready for the challenge. I got a night job at Smart and Final and I enrolled myself in The Academy of Radio and Television Broadcasting in Huntington Beach. I was eager to learn, eager to work, eager to see my dreams become a reality and I knew I was one step closer to making that happen. I soaked up ALL the information they gave me at school like a sponge! Before I knew it, 10 months had gone by and I was ready to be a DJ! Ummmm only problem, where was I going to work? I continued to intern at Power 106 throughout and after my schooling along with my job at Smart and Final. Because of that internship and my hustle and determination I landed my first radio gig at the age of 20.

I was sooo happy! I was offered and accepted a Morning Show gig at Palm Springs KKUU ‚U92.7 FM. This was a big deal for me! I had never lived so far away from my family before, but with the love, support and reassurance I received from them when I broke the news, I knew I had made the right decision. I loaded my dad’s pickup truck with a few of my things and I was on my way. Before I left I sat around with my immediate family and asked them to help me create a cool stage name that was a true reflection of me. I got so many funny suggestions, however I have to give it up to my brother. Out of the blue he said “got it!” We all looked at him eager to hear what he had come up with that we hadn’t already suggested. And he simply said “Roxy” Roxy?? Hello that doesn’t make sense!! He said‚ “No sis RAQ-C….’Raq’ for Raquel and ‘C’ for our last name!” BINGO!! And that is how Raq-C was born!

Palm Springs was so much fun and definitely a good stepping-stone for me. I experienced being in my own studio and having my own audience. And working with all the buttons and switches on an actual air shift?? Awesome! Again I soaked up all the knowledge and experience available to me and even though I was a little home sick, I embraced the opportunity as a learning one and thrived! I knew initially that Palm Springs was not a place I wanted to stay for too long. Too much of a “small town”. My goal was to conquer a much larger market such as Los Angeles or New York! So when I felt I learned what I needed to learn in Palm Springs, I returned to Los Angeles. I worked on the street team for La Raza for a while when “BAYAM” another door opened up for me. I was offered a Morning Show co-host gig this time in a large market! Yes!! What’s the catch you ask?? The position was in Chicago AND it was Mexican-Regional format!! Wow! Again I went to my family and asked them for their opinion and advice and again they were behind me 100%. This decision was a little scarier for me for the obvious reasons. 1.) I was leaving Los Angeles behind which is where I really wanted to be, to go work and live in a foreign city where everything was different – from the transportation to the elements and 2.) I knew NOTHING about Mexican Regional music! I grew up listening to Celia Cruz, Tito Puente and Juan Luis Guerra, not Los Bukies! But of course, being one who takes advantage of every opportunity, I once again packed some things, hopped on an airplane and began my journey to Chicago.

I remember looking out of the window from the airplane as Los Angeles became smaller and smaller, thinking to myself “Good bye LA, I”ll miss you! but I know I’ll be back in time”.

Chicago was great! I made so many friends, experienced many, many different things culturally, personally and professionally! That experience has been priceless for me and I would do it again in a heart beat! That’s one thing my sister taught me, to never regret anything I do because at one point it was exactly what I wanted. Chicago helped me build character. I learned what the true meaning of independent is. I was thousands of miles away from my support system and I had to learn to survive. I couldn’t drive to my mom’s to cuddle with her on her couch and watch a movie when I felt like chillin. I couldn’t visit my dad or take a nap at his house when I felt like being babied. I wasn’t able to call my sister and nephew and meet up with them for sushi. It was time to be a big girl, and like Fergie says, “Big girls don’t cry” right? I’m not going to lie and say that it was always peaches and roses, there were times when I just wanted to come running back to California, however I knew that if I didn’t cease this opportunity, someone else would cease MY opportunity and there was no way I was going to let that happen! So I stuck it out. Until one day I learned that Spanish Broadcasting Systems Inc., the company that employed me in Chicago, was launching a Hip-Hop/Reggeaton formatted station in Los Angeles. LOS ANGELES!! I debated and debated and finally decided to leave Chicago and drive back to LA. I packed my VW Beatle and high-tailed it back to the City of Angeles to once again chase that dream. This was a risky decision, because I left Chicago without a guarantee that I’d be hired in Los Angeles as an On Air Radio Personality and I wasn’t….

I began my career with Latino 96.3 on the promotions team. Was it where I wanted to be?, no not at all, however I knew I had made the right decision to leave Chicago to pursue an opportunity in Los Angeles. I worked hard and never, ever felt discouraged. I knew my time would come and that my star would shine. And my time did come. In October 2005, I, Raq-C hit the airwaves of Los Angeles full speed ahead! I quickly became known as “The Night Chick” and was embraced and accepted by all of LA! It is an unexplainable feeling knowing that through a mic I touch the lives of thousands of people daily “just by being me” WOW! I think back to when I was a little girl, dreaming of the career and the life I’d like to live one day. Well guess what, I’m living it!! Now as an adult, I continue to challenge myself. I have learned so much about myself, so much about life that I now have new goals in place, more dreams to chase, and the best part is, this time you get to come along for the ride!! Fasten your seatbelt and enjoy the ride….”