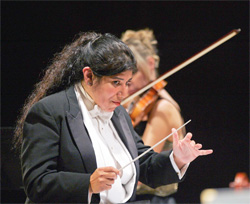 De Leon de Vega is the only woman in history to conduct a symphony orchestra at a Vatican Papal Mass and her accomplishments as a Latina in a male dominated profession are quite remarkable. Sonia is also celebrated in educational circles for creating “Discovering Music” in 1998, a two-year music education program that takes orchestra members into elementary schools in underserved Latino neighborhoods to introduce children to classical music and the instruments of the orchestra. Discovering Music is currently offered in 18 elementary schools throughout Los Angeles and has touched the lives of more than 40,000 students in 35 schools through the power of music education. Due to its success, Discovering Music has been expanded to include a string program that offers free violin lessons throughout the school year and a mentorship program in middle schools.

Born in San Antonio, De Leon de Vega is the daughter of actress/producer Sonia De Leon and singer/guitarist Reynaldo Sanchez. At the age of four De Leon de Vega moved to Los Angeles, California, where she was raised and began her musical training becoming an accomplished pianist and organist. While always distinguishing herself academically her graduate studies led her to love and specialize in conducting studies with Dr. David Buck. She also trained at the Herbert Blomstedt International Institute for Instrumental Conductors and at various American Symphony Orchestra League workshops with Otto Werner Mueller, Maurice Abravanel, Pierre Boulez, Andre Previn, Zubin Metha and Ricardo Muti. De Leon de Vega has been a guest conductor for many orchestras and opera companies and has developed concerts and children’s music workshops for the Cultural Affairs Department of the City of Los Angeles.

Santa Cecilia Orchestra is celebrating its 20th anniversary this year and is the only national orchestra with the specific mission to share classical music with the Latino communities.