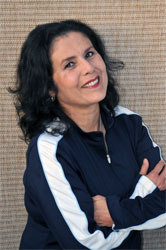 Critically acclaimed queer Chicana lesbian writer/performer Monica Palacios is widely recognized as working at the forefront of Chicana/Latina, queer, lesbian, feminist performance. For 3 decades, her work has strongly embraced activism, community organizing and cultural work. Monica is the first out Chicana lesbian comic to hit the stage in San Francisco 1982.

One of Monica’s Palacios plays.

She has written several one-woman shows, plays and screenplays, including: Amor y Revolución; Latin Lezbo Comic; Greetings From A Queer Señorita; Sweet Peace, Memory Is In Your Heart, Clock, Miercoles Loves Luna and Prom. Her plays, short stories, poems and essays, have been published in numerous pivotal anthologies: Fifteen Candles; Out of The Fringe; Chicana Lesbians: The Girls Our Mothers Warned Us About; and Puro Teatro: A Latina Anthology. Palacios is featured in the new anthology: Here Come The Brides! Reflections On Lesbian Love and Marriage, Seal Press, 2012.

Her play Clock was featured and gained rave reviews at Teatro Bravo’s New Play Reading Festival, Phoenix, Dec 2012. October 2012, Monica celebrated her 30 years as a groundbreaking Chicana lesbian artist with a retrospective show, Queer Chicana Soul, that garnered a special recognition by Los Angeles Mayor Antonio Villaraigosa and a resolution from Mayor Villaraigosa and the LA City Council members who declared Oct 12, 2012 Monica Palacios Day. Palacios’ short play Miercoles Loves Luna, was chosen for the Fall 2012 Brown & Out Theater Festival, Boyle Heights. In 2011, her screenplay Sweet Peace was selected as a semi-finalist for the Los Angeles Outfest Film Festival and acknowledged by the Squaw Valley Screenwriting Program. Her performance, The OH! Show, was published Spring 2009 Volume of Chicana/Latina Studies, the journal of MALCS, (Mujeres Activas en Letras y Cambios Social). She has been featured as the subject of critical discussion by leading scholars in the fields of Chicano/Latino Studies, LGBT/Queer Studies and Feminist Studies. She is on the cover and featured in the book: Homecoming Queers: Desire & Difference in Chicana Latina Cultural Production (2009 Rutgers University Press) by Professor Marivel Danielson. Monica’s performances and publications continue to be studied in universities nationally and internationally. November 2010 Palacios was the featured performer at the International Association of Inter-American Studies Conference at the University of Duisburg-Essen, Germany. She was instrumental in the launch of and has a blog on the website Epochalips.com, a cyber community for lesbians and allies.

In 2009, Palacios was the first openly gay performer at the Los Angeles Catholic institution Loyola Marymount University. Monica was awarded a National Performance Network Residency to participate in the International Sor Juana Inez de la Cruz Festival 2009 in Houston. Palacios was chosen by Adelante Magazine as a Latino LGBT Community Leader for its 10th Year Anniversary 2008. Monica was an Artist-in- Residence with Breath of Fire Latina Theater Ensemble, Santa Ana, receiving an “OC Weekly Summer Pick 2008.” Monica was awarded a prestigious Postdoctoral Rockefeller Fellowship from the Center for Chicano Studies, UC Santa Barbara, 2003- 2004. During this fellowship Palacios wrote, directed and produced her play Sweet Peace, and received an Indie Award for Excellence in Play Writing from the Santa

Barbara Independent Newspaper. She has been honored by numerous national organizations and publications, deservedly recognized for her many positive contributions to the queer Latino/Latina population and the LGBT population at large.

Ms. Palacios is a lecturer at UC Santa Barbara, UCLA and has taught at UC Riverside, Loyola Marymount University, The Claremont Colleges and The American Academy of Dramatic Arts. In 2008, her course, Comedy y Cultura: Your Humorous Life, became a core course for the Department of Chicana/o Studies at UCLA. Monica also has taught elementary and high school students and has worked extensively with at-risk-youth. Palacios has been a director, writer & dramaturg for over 400 student theater projects.

As the director (1992-2000) of VIVA, Lesbian and Gay Latino Artists, a non-profit art agency, activism and art co-existed as she produced cultural events throughout Los Angeles. Discovering, empowering and promoting queer Latino artists in the community was a policy she believed in then and still carries in her heart today.

“Monica is a true pioneer, a queer performer who took the risk long before it was “safe” to speak out about the conditions of the queer communities within the larger communities of Latinas and Latinos in this country.”