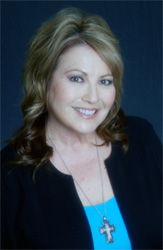 About our Latina of Influence – Olga Orosco Fernandez
Olga Fernandez is president and founder of Olga’s Underground Furniture, a 100% Latino-owned, family-run business specializing in discount caskets, accessories and funeral services. Founder and former partner of Caskets ‘N More, a 13-year old company, the industry veteran Ms Fernandez (also known as “The Discount Casket Lady”) formed her new company in 2011 and is involved in every aspect of the business, offering a wide range of services from casket and plot sales to floral and monument designs.  She set out to start a new business that not only offered home consultation, particularly for the Spanish-speaking community, but that was also online and social media connected in order to serve a wider market base.

Ms Fernandez has extensive knowledge of the funeral industry, having initially served as vice president for Direct Casket Co. for three years before forming Caskets ‘N More.  She was an influential part of the team of casket retailers that formed the California Casket Retailers Association and helped in sponsoring a Senate bill (SB1555), personally lobbying legislators in Sacramento to help stop the bundling and packaging that funeral homes were offering consumers, disproportionately affecting lower income and minority communities.  The mission of Olga’s Underground Furniture is to provide quality merchandise at up to 50 – 70% less than mortuaries, while providing the personal service necessary at what is an extremely vulnerable time for the consumer.

As a Latina, Ms Fernandez is proud to provide a much-needed product at reduced prices particularly for her community, the largest minority in Southern California and, until recently, a virtually untapped market in this industry.  Her major challenge is the David & Goliath syndrome, having to compete with such large, established corporations as Stewart, SCI and Lowen Group.  This, however, has not deterred her from taking them on, which has led to her success and strong word-of-mouth business.

Olga’s extensive volunteerism in various community organizations provides her with great personal satisfaction as well as widening her knowledge of others in the business and non-profit world.  Her participation extends to such organizations as San Gabriel Valley Chapter of the American Cancer Society, Latin Business Association, YWCA of San Gabriel Valley and the Los Angeles Chapter of the National Latina Business Women Association, which awarded her a “Latinas in Business” award in 2007.   She was also among the recipients of the 2009 “Outstanding Women of the 57th Assembly District” awards recognition. Among her many community roles, she is past Director of Fundraising for Covina American Little League, where she launched an ambitious campaign to raise over $25,000 to rebuild the league’s aging baseball field.  She is active in her children’s PTA at Glendora’s Washington Elementary, currently serving on the board as well as chairing the Reflections Program & Honorary Service Awards. Annual community events that Olga participates in include the “Remembering Our Veterans & Their Families” with Los Angeles County Supervisor Michael Antonovich, held each May in Arcadia, “A Shower of Roses” Luncheon for the Cloistered Carmelite Nuns Auxiliary of Alhambra, “Covina Kids Rock 4 Relay” event at Northview High School to benefit the American Cancer Society, as well as the Covina Chapter of Business Network International’s networking event.  And to expand her knowledge of her community even further, Olga completed a City of Covina Government 101 class to better understand how city government works.

Born in East Los Angeles and raised in Baldwin Park with four older brothers, Ms Fernandez is a divorced mother of three.  In 2005, she and her ex-husband became the proud adoptive parents of her four great-nieces and nephews, twins Marissa and Salvador, Jessica and Raymond, then ages nine, five and two, respectively.  Marissa, who was a gifted and extremely popular student at her school, suffered from the rare disorder Diamond Black-fan Anemia; sadly, she eventually succumbed to the disease in 2007. Olga helped with gathering support from Covina city leaders, neighbors and community organizers to place a new playground at Jalapa Park/Jobe Glen, dedicating a sign in Marissa’s memory as well as honoring her twin brother Salvador for his contributions of bone marrow in attempting to save her life.  Olga continues to support the blood and marrow donation efforts at Children’s Hospital of Los Angeles (CHLA), where Marissa received her care and charmed all who came in contact with her.