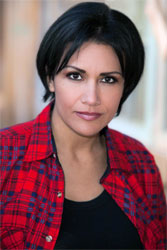 Lourdes Colon is a native of Waukegan, IL. She attended CLC in Grayslake, IL where she pursued a degree in theater.

From IMDb
Lourdes Colon, enjoys life of entertainment. She has landed a guest-starring role that put her on the charts of Hollywood, adding her on the consideration ballots for a Emmy Awardon her role on the hit TV series “Without A Trace”, playing Anna Rodriguez. She is the host on the TV show series “The Movie Time Showcase” on The Omni Broadcasting Network. She will be Hollywood’s next Rising Star. She has been on “The District”, appeared on the TV series “The Women of Brewster Place”. Films include “The Kiss”, “Blood Oranges”, “Time served”, “A Fine Line”, “The Killer Within”, “Expandable”, and “Amor Brujo”

Lourdes has done several other films and appeared in newspapers such as the Los Angeles Times,Hollywood Reporter, Waukegan News Sun, and the Chicago Tribune.

Lourdes’ decision to take her journey with cancer to another level and document everything, to inspire  others around the world, came from her love for humanity and watching many of those she loved die from cancer. Lourdes has always strived to be an inspiration to others through being the difference she wants to see in the world. This passion has allowed her to begin her journey of becoming an inspiration to those who, like her, are dealing with cancer as she does it all naturally. More information can be found on their website, Create Option C the Documentary