Articles, On The Menu 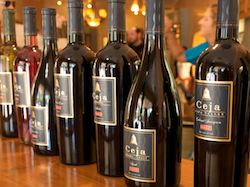 AltaMed Presents in Their Own Words II, at VIP Book Release Party at El Cholo Restaurant in Pasadena

A unique event that celebrates the richness of Mexican food and the success of Latino-owned restaurants and vineyards in California, AltaMed’s “East LA Meets Napa” will host a VIP book release party with nearly 300 guests on Thursday, July 19, 2012 at 6-9 p.m. at El Cholo Restaurant located at 260 East Colorado Boulevard, Pasadena, CA 91101.

AltaMed will celebrate its second publication, In Their Own Words II, written by Sergio C. Muñoz, Jr. of Intelatin on the eve of “East LA Meets Napa,” an event that features food stations sponsored by Los Angeles area restaurants and vintners. The book will feature the stories of Latino Restaurant families and Chefs in Southern California. El Cholo, a family-owned restaurant that is featured in the book will host a private VIP event at its restaurant complete with food, wine and music.

The event will highlight the release of the publication and include a brief program featuring readings and remarks from the owners of El Cholo and the writer, Sergio C. Muñoz, Jr. of Intelatin along with AltaMed.

AltaMed is proud to present its annual “East LA Meets Napa” event, an exclusive food and wine pairing tasting that celebrates the richness of Mexican food and success of Latino-owned restaurants and vineyards in California. The event will be held on Friday, July 20, 2012, from 6-9 p.m. at Union Station at 800 N Alameda St in Los Angeles.

The event will feature food stations sponsored by Los Angeles area restaurants and wine stations by California vineyards. Guests will combine their favorite foods with distinctive wine to discover their own perfect blend. All proceeds from the wine tasting benefit AltaMed Health Services.

AltaMed has delivered quality care to the underserved communities of Southern California for more than 40 years. Designated by the Joint Commission as a Primary Care Medical Home (PCMH), AltaMed prides itself in the quality of its care delivered by its premier health care professionals.