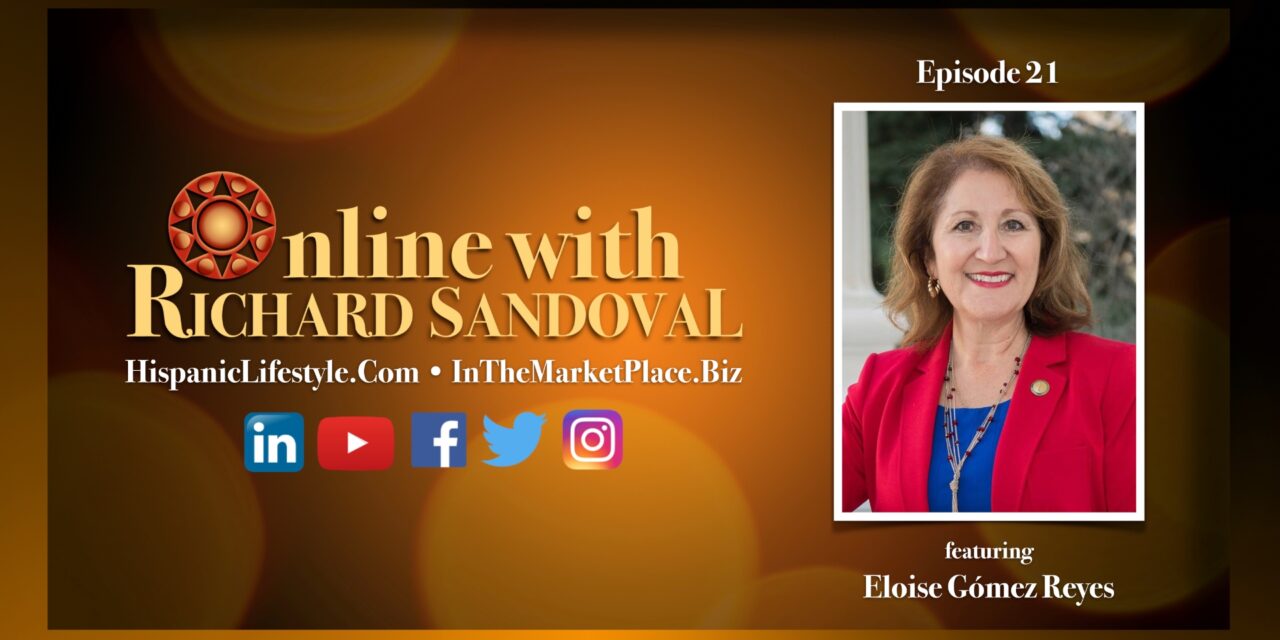 In this edition of Online with Richard Sandoval we feature a conversation with California State Assembly member Eloise Gómez Reyes. Recently appointed by California Assembly Speaker Rendon to be the Majority Leader, we covered several topics during this almost 30 minute conversation. In a brief state of California with a legislator who has impacted the community her entire life. The Majority Leaders provided insights on how California is addressing the COVID-19 pandemic, health care, education, business resources and the homeless crisis. We finish up with talking about the Inland region and the leadership of Latinos/Latinas in our state government.

Upon being sworn in to her first term, Eloise was named Co-Chair to the Legislative Ethics Committee. In the second year of her first term, she was appointed Assistant Majority Whip – a leadership position that ensures that legislative floor session operates efficiently.

In 2018, in response to growing concerns regarding the workplace culture in the Legislature, Eloise was appointed to the Subcommittee on Sexual Harassment Prevention and Response which produced recommendations to improve workplace protections for Legislative employees and others that interact with the Legislature, through the creation of the independent oversight entity, the Workplace Conduct Unit created to investigate and make recommendations on workplace harassment claims.

In her first two terms Eloise championed bills and issues that increase equity and inclusion in vulnerable communities throughout the state. These efforts include AB 2147 which lead a national conversation on second chances for inmate firefighters giving them a pathway to expunge their records and pursue a career in firefighting.
In response to the Covid-19 pandemic Eloise introduced AB 685, which requires businesses to notify their employees if they have been exposed to Covid-19 and report that information to public health authorities.

Eloise, a proud daughter of immigrants, has been a champion for her community throughout her career. The lack of access to quality legal services in her community led her to become the first Latina to open her own law firm in the Inland Empire in order to provide necessary representation to her community.

Eloise graduated from Colton High School and received her A.A. from San Bernardino Valley College. She received her Bachelors of Science degree at the University of Southern California and then Eloise went on to earn her law degree from Loyola Law School.

Eloise is honored to serve the constituents of the 47th Assembly District for her third term and is committed to working with her community to build a better quality of life for all residents of the Inland Empire.