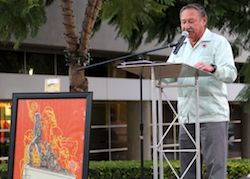 On November 19, 2012 they broke ground on the Cesar E. Chavez memorial that will be located near University Avenue and Main Street in the City of Riverside. Arturo S. Rodriguez, president of the United Farm Workers of America spoke at the ceremony. In a Hispanic Lifestyle exclusive, we are posting Mr. Rodriguez’s full speech.

About the Cesar E. Chavez Memorial

The monument was created by artist Ignacio Gomez, who created another memorial to Cesar Chavez in San Fernando. The design depicts Chavez leading field workers up an incline.

The memorial is being paid for through private fundraising. The goal is to have the monument in place in March 2013.