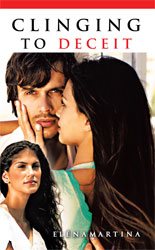 Clinging to Deceit is about a young girl has been raised her entire life with the idea of an arranged marriage that she freely accepts. However, the future groom needs to be enticed into this engagement with a hefty dowry at a time when his young, romantic heart is passionately attached to another. The powerful appeal of funds turns tragic for everybody involved, and his family realizes that happiness is not something money can buy. They soon struggle with the murder of a family member that further crushes the young man’s dreams for a happy ending. Not able to emotionally recover from it, a final blow imprisons him for life.

Elena Martina was born in Peru and has lived in the United States since she was 18. She now live in San Jose, CA.  She began to write in 1998 for a newspaper that hired her to do a bilingual weekly column. Its success made her write for eight other newspapers and during this period, she also co-created a Spanish paper and worked as Managing Editor. She then switched jobs for the State and Federal Governments (8 yrs combined).

You can find it on amazon.com as well.  I’m attaching a cover photo of the book and author photo.