Travel | The Penguin Exhibit Opens at the Aquarium of the Pacific 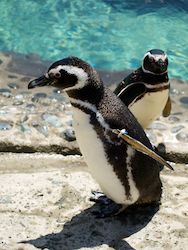 Hispanic Lifestyle continued its travels in anticipation of summer. We were invited to the opening of the new Penguin exhibit at the Aquarium of the Pacific.

Also, there is a new multimedia show on penguins is now playing daily in the Great Hall. It features sound, lights, and video projected on eight screens. This new show surrounds Aquarium guests in an immersive experience that transports them into the world of penguins.

A new film about penguins is showing daily in the Ocean Theater. Viewers travel across the Southern Hemisphere to see where penguins live in the wild. See penguins in action as they raise their chicks, swim in the ocean in search of food, and cross great distances on foot and “tobogganing” on their bellies.