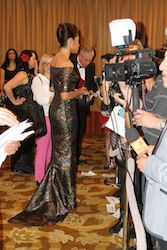 “Every year we come together as a community — a family, to commemorate the work of brilliant artists who are instrumental in the promotion of positive Latino images in media NHMC is proud to recognize their outstanding contributions in the entertainment industry,” stated Alex Nogales, NHMC President and CEO