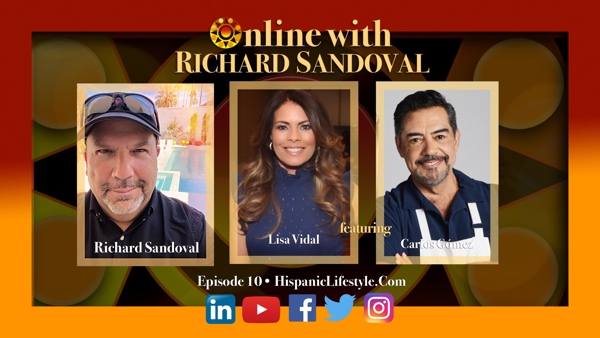 In this edition of Online with Richard Sandoval we talk with actors Lisa Vidal and Carlos Gómez about their roles on the ABC television series,The Baker and the Beauty. FULL DISCLOSURE I am a fan of the show and the work of these two actors. During our conversation they shared candid views on the effects COVID-19 is having on their families and the promotion of the NEW series.  We also discussed the support they are getting from the Latino community and ask the question, WHY ABC hasn’t picked up season 2 yet.

Lisa Vidal as Mari Garcia
Award-winning actress Lisa Vidal is no newcomer to the challenging multilayered roles she’s been so successfully portraying. Most recognized for the regular roles she’s played on popular hit prime-time series such as “Boston Legal,” “CSI Miami,” “The Division,” “ER,” “Third Watch” and “Southland”; and starred opposite Gabrielle Union on BET’s most successful series “Being Mary Jane,” and recurred on FOX’s hit show “Rosewood.” Upon completion of “Being Mary Jane,” Vidal was cast in the lead of Gloria Calderon’s CBS pilot “History of Them.” Up next, Vidal will be a series regular in the ABC drama “The Baker and the Beauty.”

Vidal then went on to play the charming housekeeper for a good-natured elderly heiress (Loretta Young) in the NBC holiday TV-movie tearjerker “Christmas Eve,” and continued with the wildly popular series “The Cosby Show” and “Miami Vice” (both NBC). Determined to take roles that reflected the diversity of the Latino community while at the same time building it up, Vidal acted in the two ABC After School Special educational presentations, “Class Act: A Teacher’s Story” and “In the Shadow of Love: A Teen AIDS Story.”

Vidal then recurred on FOX’s “New York Undercover,” playing the sister of Michael DeLorenzo’s NYC police detective, which widened her audience growth. Next, she was cast as cocky Jessica Helgado in the Steven Spielberg police drama “High Incident” (ABC) and “The Brian Benben Show” (CBS). Though television would remain her primary medium, Vidal has also starred in various feature films from “Night and the City,” “I Like It Like That,” “Dark Mirror” and “Victor.”

Vidal currently resides with her family in Los Angeles, California.

Carlos Gómez as Rafael Garcia
Carlos Gómez is one of the most versatile performers working today. With a career spanning more than 25 years in film, television and theater, he is considered one of the Latino actors who blazed the trail for others who have since followed.

Gómez currently appears in the ABC drama series “The Baker and the Beauty.” He starred in the NBC drama series “Law & Order True Crime: The Menedez Murders” as Jose Menendez and also had a recurring guest star role in the hit drama television series “Madam Secretary” as Agent Jose Campos.

His feature film work includes starring roles in “Spiked” with Aiden Quinn, “Ride Along 2” opposite Ice Cube and Kevin Hart; “The Torture Report,” “Trial by Fire,” “A Dolphin Tale 2,” “Desperado,” “Fools Rush In” “Enemy of the State,” “The Replacement Killers,” “A Day Without A Mexican,” “All About Steve,” “The Mambo Kings,” “The Negotiator,” “The Perfect Game,” “House of Sand and Fog” and many others. He’s also worked alongside Salma Hayek, Antonio Banderas, Sandra Bullock, Samuel Jackson, Kevin Spacey, Alec Baldwin, Nicole Kidman and George Clooney.

In theater, Gómez starred in over 300 performances as Kevin Rosario in the original Broadway production of the Tony Award®-winning musical “In the Heights.” His two songs “Inutil” and “Atencion” were both part of the GRAMMY® Award-winning musical’s soundtrack. In 2016, Gómez returned to the New York stage in the critically acclaimed play “Daphine’s Dive,” helmed by Hamilton’s director Thomas Kail.

Gómez is of Cuban descent and resides in Los Angeles, New York and Miami.