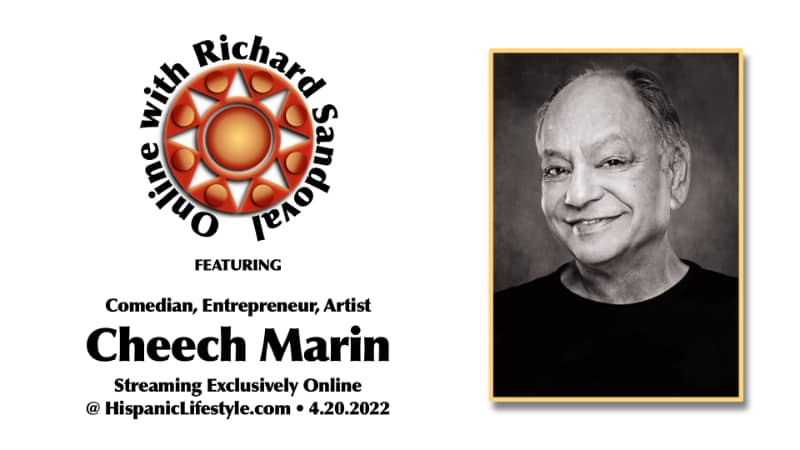 About Cheech Marin
Best known as one half of the hilariously irreverent, satirical, counter-culture, no-holds-barre Cheech and Chong, Cheech Marin is a paradox in the world of entertainment. Cheech is an a director, writer, musician, art collector and humanitarian, a man who has enough talent, hum intelligence to do just about anything. He is truly a multi-generational star-or as Cheech jests, know me from the womb to the tomb.” To this day, Cheech and Chong films remain binge classics, and Cheech is widely acknowledged as a cultural icon.

Between 1972 and 1985, Cheech & Chong released nine albums and won a Grammy in 1973 for Best Comedy Recording.  The duo made a fluid transition to films, starring in eight features together. Up In Smoke, was the highest grossing comedy of 1978, topping $100 million at the box office .

Given his knowledge about cannabis, Cheech thought it only fair to develop his own personal brand of curated cannabis “Cheech’s Stash,” a little piece of paradise for the connoisseur of pleasurable living. Cheech has personally selected strains and worked with master growers to sustainably produce an all natural selection of quality cannabis products, representative of over four decades of legendary experience. Cheech’s participation in the cannabis business marks a major milestone for the longtime advocate and global counterculture icon who says he remains dedicated to his vision of “sharing the love, experience, and understanding of cannabis”, and is looking forward to shaping the future of the adult-use market responsibly.

Marin’s individual acting career has also been very fruitful.  Cheech has appeared in over 20 films, including his scene-stealing role in Tin Cup (1996) where he played Kevin Costner’s caddy, and eight of Robert Rodriguez’s movies for which he played international characters.

Cheech made his debut as a sitcom regular on the CBS show “The Golden Palace,” before joining Don Johnson on the highly successful CBS drama “Nash Bridges” (1996-2001).  The iconic duo reconciled in 2020 to shoot the “Nash Bridges” reboot a TV movie for the USA Network.

In 2008, the legendary Cheech & Chong reunited after 25 years apart, and embarked on the “ Light Up America” comedy tour. The pop culture duo performed for more than 100 audiences and quickly became one of the most sought after shows of 2008-2009. Additionally, their performance in San Antonio Texas was filmed as Cheech and Chong’s: Hey Watch This! on 4/20/10. “We had an amazing time last year reconnecting with each other and our fan that felt like it was part of our DNA, we were meant to be together,” said Cheech Marin. The duo have just announced their latest joint venture – Cheech & Chong’s Takeout, a statewide delivery service.

Cheech Marin contributes a lot of time and energy to promoting Chicano art.  Since the mid-1980s, he has amassed a phenomenal and renowned private collection of Chicano art, the largest in North America.  More recently, the city of Riverside, CA granted Cheech his own museum – The Cheech Marin Museum of Chicano Art and Culture.  The first of its kind, the goal of Marin’s Center,  would be to provide a permanent home for more than 700 works from Cheech’s personal collection, which includes painting, sculpture and photography by Chicano artists from throughout the United States.  Says Cheech “It’ll be the one place worldwide that everybody can go to for all things Chicano art.”  The museum is scheduled to open on June 18, 2022.

An exceptional golfer, Marin is extremely active in the charity golf circuit.  He is married to Russian-born classical pianist Natasha Marin.  They reside in Pacific Palisades, CA