Travel | Aquarium of the Pacific 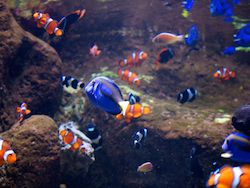 Three football fields could fit into the Aquarium’s expansive, three-story 353,685 square feet facility, which features 50 exhibits and Behind-the- Scenes Tour areas. More than 11,000 ocean animals, representing over 500 species, reside in the Aquarium. Exhibits range in size and capacity from about 5,000 to 350,000 gallons.

The Aquarium of the Pacific features a changing Special Exhibits Gallery that currently features the Arctic & Antarctic: Our Polar Regions in Peril exhibition. In this gallery visitors can see polar animals, safely touch sea jellies, and learn how climate change is affecting the Arctic and Antarctic.

Shark Lagoon is an educational adventure that features a main exhibit showcasing large sharks and two touch pools where visitors can reach in and touch more than 150 smaller sharks. Interactive displays, the Shark Shack gift store, and Bamboo Bistro are also part of Shark Lagoon.

Thursday, May 17, 2012 Aquarium’s First Penguin Exhibit Opens 9:00 a.m.-6:00 p.m. The Aquarium of the Pacific will debut a new permanent exhibit, the June Keyes Penguin Habitat, home to the first penguins in the Aquarium’s collection. The exhibit will feature Magellanic penguins, some of which were rescued from Brazil where they were stranded outside their native habitat. The penguins will join the Aquarium’s collection of more than 11,000 animals in the institution’s fifty exhibits representing the diversity of the Pacific Ocean. Cost: General admission–$24.95 adult (12+), $21.95 senior (62+), $13.95 child (3-11), and free for children under age 3 and Aquarium members. Location: Aquarium of the Pacific, 100 Aquarium Way, Long Beach, CA 90802 Info/Tickets: 562-590-3100 or www.aquariumofpacific.org