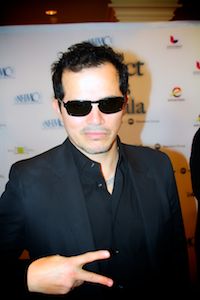 Hispanic Lifestyle spoke with award winning actor John Leguizamo on the red carpet at the National Hispanic Media Coalition impact award gala. We talked about acting styles and his work in the theater.

From the Web
John Leguizamo was born in Bogotá, Colombia, to Alberto and Luz Leguizamo. According to Leguizamo, his paternal grandfather was of Puerto Rican and Italian descent and his maternal grandfather was Lebanese. Leguizamo has also described himself as being of Amerindian and Mestizo heritage. Leguizamo’s father was once an aspiring film director and studied at Cinecittà, but eventually dropped out due to lack of finances.When Leguizamo was four years old, his family immigrated to the United States and lived in various neighborhoods of Queens in New York City, including Jackson Heights.