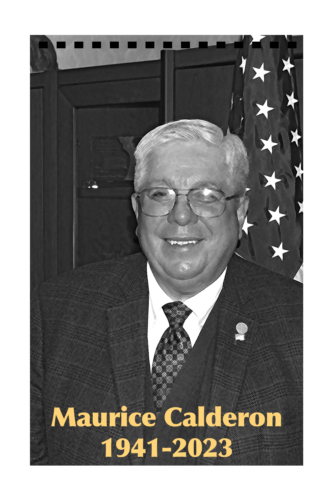 Obituary
Maurice A. Calderon Sr. passed away on January 10, 2023, at his home in Redlands, California at the age of 81.
Maurice was born in Banning, California on April 4, 1941, to Fabian and Nettie Calderon.

Born and raised in Banning, California he learned the rich traditions and values of his Hispanic heritage and used those lessons throughout his professional life. This treasured background guided him in his unwavering commitment to professional and public service to the people of the Inland Empire. Maurice attended Banning schools and graduated from Banning High School in 1959 where he met the love of his life, Dorothy Rivera. They married on June 4, 1960 and spent nearly 63 years together. They had two children Maurice Jr. and Racquel and Mona Esquivel Estrada who they raised as a daughter. Early in life, he learned the importance of hard work and he instilled that same work ethic in his children. Maurice was immensely proud of his father’s service to his country, writing a book in his honor entitled “In Search of My Past: Father, Patriot and Hero.” The book tells the story of his fathers heroism as a B-17 top turret gunner in World War II.

Maurice received an Associate of Arts degree from Mount San Jacinto College with honors and certificates from the University of Georgia and Indiana University in Savings and Loan Graduate programs.

In 1968, at the age of 27 he was the first Hispanic to become an elected school board member in Banning, where he served for 9 years. He followed that by serving another 9 years as a Trustee on the Mount San Jacinto Community College District. Maurice was the top vote getter in each election.
Maurice worked in the banking industry for 41 years and retired as Senior Vice President of Minority Development at Arrowhead Credit Union in 2008. Maurice advocated on behalf of Arrowhead and its 150,000 members as a community representative with an emphasis on performing outreach to underserved communities. His vision and foresight earned him acolytes from all areas of civic engagement. A street in Banning, California “Calderon Way” is named in his families honor and serves as a symbol of their service to the community.

Maurice established the Inland Empire Hispanic Leadership Council in 2007. Together with a collection of Hispanic civic leaders from San Bernardino and Riverside Counties, he visualized a presence of a uniform Hispanic voice that would guide policies within the business, education, health, and public policy areas to champion for the citizens of the Hispanic community.

Maurice was an active member of numerous business education and community groups. He was a member of the African American Chambers of Commerce, Board of Trustees of the University of California, Riverside Foundation, and the San Bernardino Valley College Foundation. Maurice was also the Director of the Inland Empire Economic Partnership, President of Sinfonia Mexicana, and Chairman Emeritus of the Inland Empire Hispanic Leadership Council.

Maurice was named the inaugural “Hispanic of the Year” and Influential Latino of the Year in 1998 by the Inland Empire Hispanic Chamber and Hispanic Lifestyle Magazine. He was the inaugural recipient of the California Credit Union League Diversity Award and was named to the Southern California Native American and Latino Hall of Fame.

In April of 2004, he was honored as the recipient of the Reconociemiento Ohtil Award, an award given by the Mexican Ministry of Foreign Affairs, which recognizes those who have proven their excellence, are role models for the society and have contributed most successfully to the well-being of the communities of Mexican origin in the United States. Maurice was awarded the Black Rose Award in 2004 from the San Bernardino Black Culture foundation for his dedication and service to the community.

To honor Maurice’s memory, we are holding a celebration of life at 4:30pm on February 3, 2023, at Emmerson-Bartlett Memorial Chapel in Redlands. We invite anyone who knows him to attend and reflect on his wonderful life. There will be a mass at 11:30am on February 4, 2023, at Holy Name of Jesus Catholic Church-Olive Avenue. Immediately followed by burial services at 1:30pm at Montecito Memorial Park in Colton.
Dad, you are now at peace and will forever live in our hearts. We love you so much. Rest in peace.