Star Wars Season of the Force 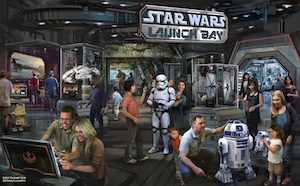 As the Force awakens at the Disneyland Resort, Star Wars Season of the Force debuts Nov. 16, bringing exciting new experiences to Disneyland Park to celebrate all things Star Wars. Adding to the annual Holidays season and the dazzling 60th Anniversary Diamond Celebration, Season of the Force in Tomorrowland will entertain fans of the famous film saga and guests looking forward to the future Star Wars-themed land.

Among the elements entering this galaxy are Star Wars Launch Bay, an interactive space in the newly named Tomorrowland Expo Center; Star Wars: Path of the Jedi, a cinematic overview of the Star Wars saga; a new adventure in Star Tours – The Adventures Continue, and the reimagined attraction, Hyperspace Mountain. Opening Dec. 8, Jedi Training: Trials of the Temple enhances this popular show with new characters and a new villain.

To further immerse guests in the saga, Star Wars-themed décor will celebrate iconic characters and moments from the films, and Star Wars-inspired food and beverage will be available.

Season of the Force arrives just in time for the holidays, giving guests in Tomorrowland a glimpse into the world of the upcoming film, Star Wars: The Force Awakens, which is scheduled to premiere Dec. 18, 2015. The Holiday season at the Disneyland Resort runs from Nov. 13, 2015 through Jan. 6, 2016.

The new Season of the Force Star Wars experiences include:

Star Wars Launch Bay Cargo – Guests may bring home high-end artifacts and treasures, including signed memorabilia, studio models and personalized D-Tech on Demand mobile device cases.
Star Wars: Path of The Jedi: In the Tomorrowland Theater, guests will relive stories from the Star Wars saga – or discover them for the first time – in this short film compilation. “Star Wars: Path of the Jedi” connects iconic scenes from the films in fun new ways, following the journey of Luke Skywalker. It includes moments from the new movie Star Wars: The Force Awakens.

Star Tours – The Adventures Continue: Guests looking for galactic adventures will meet new characters and journey to an iconic world from Star Wars: The Force Awakens. Along with this new destination, guests will visit other well-known locations from throughout the galaxy.
Jedi Training: Trials of the Temple: This popular interactive show is being reimagined, and a new version will open in Tomorrowland Dec. 8 with Darth Vader and the Seventh Sister Inquisitor, a new villain from the popular Disney XD series Star Wars Rebels.

Hyperspace Mountain: The classic Space Mountain attraction is reimagined as Hyperspace Mountain, thrusting guests into the darkness for an action-packed battle between Rebel X- wings and Imperial TIE fighters. A new soundtrack, inspired by the films’ musical themes, adds to the thrills.

Stormtrooper Patrols: In Tomorrowland, guests may to come face to face with First Order stormtroopers who will patrol the area near Star Wars Launch Bay.

Galactic Food: Guests will experience Star Wars through their palates, as well, with tasty food and beverages inspired by a galaxy far, far away. The Galactic Grill, in the Tomorrowland Terrace location, will feature a dark side and a light side menu, and Pizza Port will offer new Star Wars-inspired menu items.