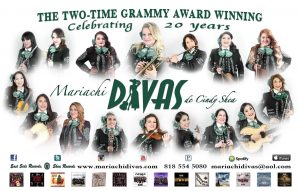 Founded in 1999, by musical director and trumpet player Cindy Shea, Mariachi Divas is known for its innovative and eclectic array of music ranging from mariachi classics to jazz and pop. Their music can be characterized as sophisticated, smooth, and refined providing an elegant approach to the mariachi tradition and part of the successful sound in which Mariachi Divas excels. Due to the wide accessibility of Mariachi Divas and their vast fan base, since 2003, Mariachi Divas is the official premier all-female mariachi of Walt Disney Parks and Resorts, performing year-round at Disneyland, Disney California Adventure, and Downtown Disney, Anaheim, California. Due to their popularity, the group is the official all-female mariachi for Disney Pixar’s Coco inspired show at Plaza de La Familia/Día de Los Muertos celebration at Disneyland, Anaheim, California. Recognized as the leading female mariachi ensemble, Mariachi Divas is often sought after to appear in various television, film, and music video projects.