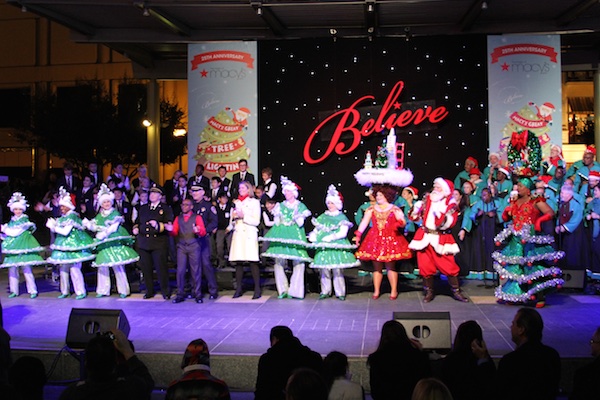 “Macy’s is proud to continue the tradition of giving the Great Tree in Union Square, celebrating the magic of the holidays and the start of the holiday season”, said District Vice President Jane Mitchell. “Here at Macy’s, a big part of our holiday spirit is in giving, not just to our loved ones, but also giving back to our communities. The tree is our holiday gift to the city of San Francisco, bringing the nostalgia and magic of the holidays to residents and visitors alike.”

San Francisco’s most recognized Christmas tree will be lit at the end of the ceremony, around 6:40 p.m. Those inspired by the Union Square Great Tree can visit the festive Holiday Lane on the seventh floor or Macy’s Union Square to see lavishly decorated Christmas trees, thousands of ornaments, and other embellishments for the home. The holidays would not be the same without a visit to Santa. Old St. Nick will listen to holiday wishes and be available for portraits in Macy’s Santaland®, also on the seventh floor, starting Friday, November 28 through December 24.

This year marks the seventh anniversary of the Macy’s Believe campaign in partnership with the Make-A-Wish Foundation, inviting children of all ages to mail letters to Santa using Macy’s Santa Mail letter-boxes.  Macy’s donates $1 for each letter mailed in-store, up to $1 million, to Make-A-Wish, bringing the holiday spirit to children throughout the year.  The Macy’s Believe mailbox is located on the 7th floor in the Macy’s Union Square store.  All the mail that is put in that mailbox is sent directly to Santa at the North Pole. And, for every letter, Macy’s will give $1 to the Make-A-Wish Foundation.

About Macy’s
Macy’s, the largest retail brand of Macy’s, Inc., delivers fashion and affordable luxury to customers at approximately 800 locations in 45 states, the District of Columbia, Puerto Rico and Guam, as well as to customers in the U.S. and more than 100 international destinations through its leading online store at macys.com. Via its stores, e-commerce site, mobile and social platforms, Macy’s offers distinctive assortments including the most desired family of exclusive and fashion brands for him, her and home. Macy’s is known for such epic events as Macy’s 4th of July Fireworks® and the Macy’s Thanksgiving Day Parade®, as well as spectacular fashion shows, culinary events, flower shows and celebrity appearances. Macy’s flagship stores — including Herald Square in New York City, Union Square in San Francisco, State Street in Chicago, Dadeland in Miami and South Coast Plaza in southern California — are known internationally and leading destinations for visitors. Building on a more than 150-year tradition, and with the collective support of customers, employees and Macy’s Foundation, Macy’s helps strengthen communities by supporting local and national charities giving more than $70 million each year to help make a difference in the lives of our customers.