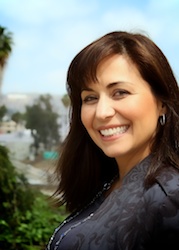 Actress, producer Yeniffer Behrens was born in Caracas, Venezuela but her grandfather’s position as a diplomat led to the family’s move to Washington, D.C. when she was just 3 years old. Even as a small child, Yeniffer’s dazzling smile and effervescent personality were easily apparent and she was inspired to become a performer by the age of six. At age nine, the family would move to Miami and naturally, the energetic Yeniffer grew to be a sparkling cheerleader and win the Miss Teen Miami Pageant. She also proved that she had brains and determination, as well as beauty, when she earned her Associate of Arts degree in theatre from Miami-Dade Community College. She continued her theatre training at the prestigious North Carolina School of the Arts.

Yeniffer has been proving herself behind the camera as well. She served  as Producer and/or Executive Producer in the films

Under the moniker of her very  own production company, True Form Films, Yeniffer is honing her skills as a Director and Producer. She is celebrating the premiere of  documentary  Create Option C, which followed actress Lourdes Colon as she travailed through her near death battle with cancer. It will premiere March 16, 2014 in the Los Angeles women’s International film festival.

Yeniffer made her film debut in the Sylvester Stallone blockbuster The Specialist. She then landed numerous television roles in both Anglo and Hispanic markets, including Morelia and Te Amare en Silencio, the first novela filmed in Los Angeles. Yeniffer’s star continued to rise when she landed a recurring role in La Familia Fernandez, produced by Univision’s Sabado Gigante. In 1997, Yeniffer starred as the title character in the Independent film Angel Blue, opposite Sam Bottoms and Karen Black. Angel Blue was later released by Lifetime network under the title My Neighbor’s Daughter and Yeniffer was singled out for excellent reviews including: “Pic definitely benefits from Behrens’ poise and energy” – Variety 4/98.

She also had supporting roles in Exit, and Seven Sundays, directed by Cousin Cuisine director Jean-Charles Tachella. Yeniffer then co-starred in My Fathers’ Love and Gabriela. Director Vincent Miller wrote, “Yeniffer Behrens projects the charisma and unique beauty only found in stars. She’s seductive and vulnerable yet always real in her performance. Her talent and quality will take her far.” Yeniffer also landed a role in the short film, Lili, from 20th Century Fox’s Search Lab and recurring roles in Trials of Life and the PBS mini-series A Question of Citizenship.

Yeniffer took on a lighter acting load for a little while as she set out to “travel and see the world”. Her journey took her around the globe to some exotic locales such as India, The Caribbean, Spain, Peru, England, Nepal, Italy, Venezuela, Paris, and more. While she would occasionally take on an acting role or two during this period, Yeniffer used this opportunity to enjoy the world as her classroom and she credits the trek for helping her to grow as a person and as an actor.

When Yeniffer returned, she hit the ground running by garnering a role in the controversial film, A Day Without A Mexican. While she landed an impressive line up of commercial spots, Yeniffer turned in strong performances in her guest starring roles in network shows Boston Legal, JAG, The Agency, the critically acclaimed Nip/Tuck and a steamy performance on ABC’s legendary General Hospital.

Yeniffer works hard to polish her craft as an actor at several highly respected institutions such as Peter Murietta’s improv group, Unitard, The Acting Class, with Silvana Gillardo, Margie Haber Studios, the Jeremiah Comey Studios and Sheila Kelley’s The S Factor. She is also proud to have been part of several exclusive showcases such as the ABC Showcase, Urban Graffiti and Billy Bob Thornton’s Not Just Another Showcase.

In 2005, Yeniffer helmed a fund-raiser event for the Susan G. Komen Foundation to raise awareness for breast cancer and made numerous red-carpet appearances including her role as presenter to Wilmer Valderrama at the 34th Annual Golden Eagle Awards. She can often be seen and heard in a strong slate of television and radio campaigns and she starred in the film shorts, 3some, and Late Bloomer.