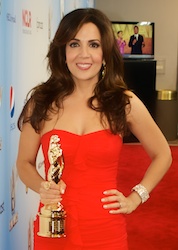 María Canals Barrera is an American actress, voice actress and singer. She is best known for her roles as Theresa Russo in Wizards of Waverly Place, Connie Torres in Camp Rock and Camp Rock 2: The Final Jam, and as the voice of Shayera Hol/Hawkgirl in Justice League and Justice League Unlimited. She also voiced the character of Sunset in the Disney Channel show, The Proud Family.

She has worked extensively in theater in both Miami and Los Angeles. She made her network television debut in the 1993 TV series Key West and has appeared in the WB series Popular as a prostitute by the name of Candybox, as well as such films as America’s Sweethearts and The Master of Disguise. She has gained much recognition with comic book fans in recent years for her role as Hawkgirl/Shayera Hol on Bruce Timm’s Justice League and Justice League Unlimited series.

Barrera, who speaks Spanish and is of Cuban descent, took drama classes in junior high. She lives with her husband, actor David Barrera, and their two daughters, Bridget and Madeleine while a large percentage of her extended family lives in Miami, FL.

She also had a recurring role in Static Shock as Shelly Sandoval, a news reporter, and in Danny Phantom as Danny Fenton/Phantom’s high school crush, Paulina. She also performed the voice of Mercedes “Meche” Colomar in the 1998 video game Grim Fandango. Canals also played incidental characters in two episodes on the TV series The Boondocks (“Grandad’s Fight” and “Home Alone”).

Canals has also starred in the George Lopez TV series playing George’s sister-in-law, Claudia. She is the voice of Sunset Boulevardez on The Proud Family. She portrays the main character of Theresa Russo in the hit Disney Channel Original Series Wizards of Waverly Place. She portrayed in the 2008 Disney Channel Original Movie Camp Rock alongside Demi Lovato in the role of her mother, Connie Torres.

Hispanic Lifestyle spoke with the award winning actress on the red carpet at the 2011 Society of Hispanic Professional Engineers gala.

source: from the web