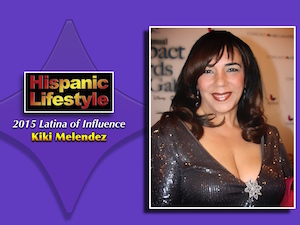 Our video segment was shot in 2013 at the  National Hispanic Media Coalition gala. Kiki talks about projects, career and passion for making people laugh.

Named American Latino Pioneer in Entertainment. Kiki was the only female comedienne nominated for the first annual American Latino Awards. She received the Key to Harford, Connecticut by Mayor Perez making “Cinco De Mayo 2007” Kiki Melendez Day in Hartford. She was also given a Certificate of Appreciation by Mayor Villaraigosa in Los Angeles, California. She received the prestigious “MAVERICK AWARD” By the Los Angeles Women’s Theater Festival in March 2007.

Her first job was as morning hosts for radio stations: La Nueva FM, 105.9 in New York and KRLA, Groove 103.1 in Los Angeles. In 1998, Melendez successfully transitioned from a career in radio to one in television with guest appearances on “The Tracy Ullman Show” on HBO, “The Steve Harvey Show” on the WB, “Strong Medicine” on Lifetime TV and many others.
Galavision Network picked up the show, which Melendez hosted and produced, for 13 episodes. Melendez went on to have the No. 1 ranked entertainment show on the Galavision Network, Kiki desde Hollywood. It was America’s first bilingual variety show. Melendez has also held Hollywood reporting positions with the British Broadcasting Company and other international media outlets.
Melendez on Films and Television with her starring roles in the award winning movie “Day Shift“, National Lampoons “Cattle Call”, and “Benny Bliss and The Disciples of Greatness“. She has also appeared on HBO’s Tracy Ullman Takes On…, Lifetimes Strong Medicine, NBC’s City Guys, WB’s Steve Harvey Show and more…

Hot Tamales Live! was chosen as the Closing show to perform at the HBO Comedy Festivalat Caesar’s Palace in Las Vegas on November 17.

She studied at Lee Strassberg Theater and Film institute and HB Studios in NYC. She went on to produce a groundbreaking theatrical presentation “Latin City” which was critically acclaimed in NYC. She was a member of many prestigious theater groups in NYC and Los Angeles. Melendez is also a certified Hypnotherapist and has a BA in Psychology.

She spent her early years in New York City, watching mainstream televisions shows such as The Brady Bunch and Bewitched during the day and telenovelas in the evening. During her adolescence, Melendez’s family moved Latin Hollywood Films. LHF owns approximately 10 projects which include Sitcoms, Reality shows, Children’s Television and more.

She spent her early years in New York City, watching mainstream televisions shows such as The Brady Bunch and Bewitched during the day and telenovelas in the evening. During her adolescence, Melendez’s family moved to a predominately Jewish community in North Miami. She often jokes about her being the only kid required to go to school on Jewish holidays.

Melendez is most proud of being a Mommy. In March 2003 Melendez married Scottish Bloke, John Berry. Together they are raising five year old twins Alessandra and Isabella.

Kiki’s favorite saying is, “Don’t be at the airport when your ship comes in.” As a result of her entrepreneurial spirit, those who know Melendez often joke that she’ll have a Lear jet waiting if she ever misses her ship!