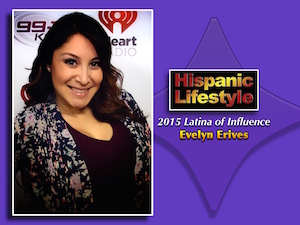 Currently calling Corona, California her home, Evelyn Erives was raised in Fontana, and is a graduate of Fontana High School. Known even then, for the unique sound of her voice, she was only 16 years old when she began her broadcasting career as the Co-Host of a TV show called Campus Daze. Today, a staple in the community and the voice you’ve heard during your morning drive on 99.1 KGGI for over 12 years, Evelyn continues to bring her Latina sizzle, sass, & sharp wit every weekday on “The IE’s Morning Show”. Her passion for volunteering in the community has inspired many of her fans to join her efforts and has earned her countless awards including Woman of the Year and the National Media Award for Excellence in Radio Broadcasting from the Leukemia & Lymphoma Society. All this while balancing a happy family that includes 3 kids under 11! It’s clear, listeners love relating to Evelyn and she loves them back like family.