“Journey of A Female Comic”, 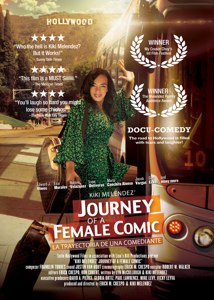 “Journey of A Female Comic” is a Documentary Comedy starring Latino comedienne Kiki Melendez, will be released through AMC Theatres’ AMC Independent Program in Los Angeles and

San Diego on May 2nd, 2014 with other major markets to follow. The date will also see the release of “Water & Power”, which will be a historical accomplishment for Independent Latino Filmmakers just in time for the Cinco de Mayo weekend.

“Journey of A Female Comic” is an inspirational film for audiences of all races, genders, and backgrounds. I t centers on Melendez’ life growing up in a developing country, being raised by a single immigrant mother, and her career in Hollywood pursuing the American Dream. Never forgetting her humble beginnings, Melendez’ journey is thought-provoking, inspiring audiences to discover the difference between fame and fulfillment.

“Journey of A Female Comic” fits perfectly within our AMC Independent programming initiative, which opens our screens to movies that resonate with our diverse audiences,” said Nikkole Denson-Randolph, Vice President of Alternative Content at AMC. “Kiki Melendez’ story is honest and entertaining, and will connect with many of our guests.”

“I am so grateful to AMC Independent for the opportunity to share my story. My hope in making this film, is to encourage and inspire women to take their dreams into their own hands”, says Melendez.