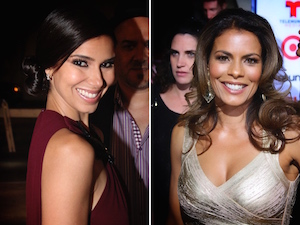 On Wednesday, the National Hispanic Media Coalition (NHMC) announced its first round of honorees for the 18th Annual NHMC Impact Awards Gala, which will be held on Friday, February 20, 2015 at the Beverly Wilshire Hotel in Beverly Hills, California.

The NHMC Impact Awards Gala recognizes the outstanding achievements and contributions to positive portrayals of Latinos in media. The annual gala is one of the premier Latino entertainment events in the country, hosting Hollywood’s most influential figures.

The evening’s co-emcees will be Roselyn Sanchez, star in Lifetime’s Devious Maids, and Lisa Vidal, star in BET’s Being Mary Jane.

NHMC also announced it will commemorate the life of actress Elizabeth Peña in a special memorial tribute presented by her dear friend, Academy Award-nominated actor, director, film and music producer Andy Garcia (Rob the Mob, Rio 2, The Lost City). The late actress, who died at 55 last year, was best known for her work in La Bamba, Modern Family, and Rush Hour. In 2000, Peña received an NHMC Impact Award for her trailblazing achievements that paved the way for Latinos in Hollywood.

Among the honorees is international star Carlos Ponce, who will receive an Outstanding Performance in a Television Series award for his work on ABC’s comedy series Cristela. Ponce’s long entertainment career as a film and television actor, show host, and double platinum award-winning singer has included leading roles in popular telenovelas such as Televisa’s Sentimientos Ajenos, work as an Entertainment Tonight correspondent, and host of Univision’s Control.

Jon Seda will receive an Outstanding Performance in a Television Series award for his role on the NBC drama Chicago P.D. His acting career spanning more than two decades includes prominent roles in the hit NBC series Homicide: Life on the Street and in films such as Selena and I Like It Like That.

MiTú, Inc., a media company and digital multi-channel network operator, will receive the inaugural Outstanding Innovation in Social Media award for its leadership in captivating Latino audiences through high-quality and culturally-relevant content, and opening doors for Latino talent to advance their careers in a fast-changing media industry. MiTú Network Founding Partner and President Beatriz Acevedo will accept the award.

Golden Globe-winning actress Gina Rodriguez has been invited to receive an award for her leading role in CW comedy-drama Jane the Virgin.

Additional honorees will be announced.

“This year’s honorees are proving that audiences want to see more multi-dimensional Latino stories and performances,” said NHMC President and CEO Alex Nogales. “We are proud to celebrate outstanding Latino talent and innovation that is paving the way for Latino inclusion in media.”

Follow @nhmc and hashtag #ImpactAwards on Twitter for the latest updates on the 18th Annual NHMC Impact Awards Gala.

For information about becoming a sponsor or placing an ad in the 18th Annual NHMC Impact Awards Gala program book, please visit www.nhmc.org/ImpactAwards.