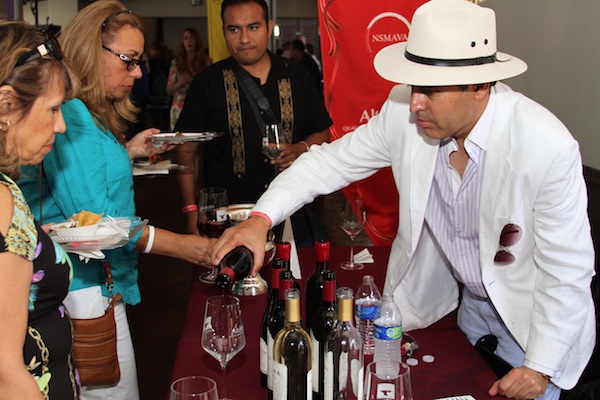 California’s largest Community Health Center, AltaMed is excited to celebrate the 10th anniversary of its signature fundraiser, East LA Meets Napa. Co-chaired by revered chef John Rivera Sedlar, the annual food and wine event will bring the best Latino-centric restaurants in Los Angeles and Latino-owned wineries in Napa together in Downtown LA’s iconic Union Station on Friday, July 17th to raise money that will support essential health programs in underserved communities. This year, French chefs and Bordeaux wines will also join the mix as part of AltaMed’s collaboration with the City of Los Angeles’ Sister Cities Program, which promotes cultural exchange through food, ideas, and art with select destinations around the globe.

“I am so proud to see how East LA Meets Napa, the proceeds for which fund essential programs for the Los Angeles community, has grown over the past ten years,” said AltaMed CEO Cástulo de la Rocha. “It started as a small idea, and now it’s our largest event.”

New and returning restaurants, many of whom have roots in East L.A.’s historic Hispanic community, will offer guests a truly unforgettable experience that highlights the richness of local Latin cuisine and culture. Participants will include chefs and restaurants like Ray Garcia, the rising culinary star behind the hotly anticipated restaurant Broken Spanish; Chichen Itza, the award winning, family-owned eatery that specializes in authentic Yucatecan food traditional to Southeast Mexico; and the century-old El Cholo, credited for first introducing nachos to Los Angeles.

“I have had the privilege of working closely with Cástulo de la Rocha and AltaMed over the past ten years as a participant at East LA Meets Napa, and have seen the tremendous impact the fundraiser has had on the local community, both by supporting Latino chefs and vintners and by raising the money needed to fund the organization’s programs,” said Sedlar. “I’m thrilled to be a part of the committee putting together the tenth anniversary event and am equally excited to be working with Los Angeles’ Sister Cities Program in Bordeaux to offer guests a one-of-a-kind tasting experience.”

In addition to the array of flavorful bites will be sips from Napa-based Latino vintners, highlighting a broader cultural influence in the region. Visiting winemakers include Rolando Herrera, who worked construction jobs at various vineyards before pursuing a college degree in viticulture and opening Mi Sueno Winery, and Lupe Maldonado, who spent years working the area’s vineyards before purchasing his own ten acre plot, now the home of the eponymous Maldonado Vineyards.

In addition to authentic food and exquisite wines, guests can explore the dedicated Napa and Bordeaux pavilions that will showcase the artistic contributions of both cultures region, including the personal collection of art from renowned Chicano artist Cheech Marin and a showcase from the Anthony Quinn collection in celebration of his 100th Birthday.  General admission tickets ($150) will go on sale starting June 15th and can be purchased online through the event website. For additional information, please visit www.altamed.org/eastlameetsnapa.

About AltaMed:
AltaMed Health Services is the largest independent Federally Qualified Community Health Center in the U.S. and delivers more than 1,000,000 annual patient visits through its 46 sites in Los Angeles and Orange County.  Through fundraising events like East LA Meets Napa and the inaugural OC Meets Napa, AltaMed is able to sustain their mission of providing quality health care without exception to underserved communities throughout Southern California.  Follow East LA Meets Napa on Facebook @EastLAMeetsNapa, Twitter @LA/OCMeetsNapa, and Instagram, @FoodWineFestival for updates on participating chefs, vintners, ticket sales and more.