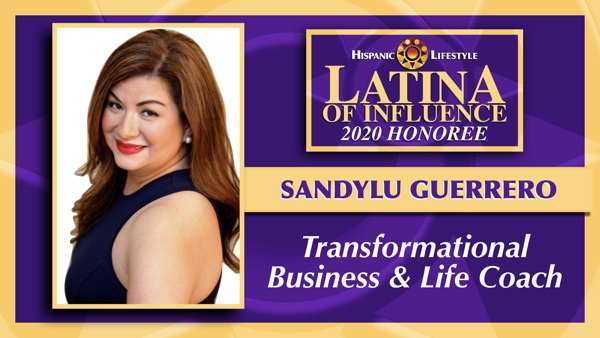 Hispanic Lifestyle is pleased to recognize Transformational Business & Life Coach, Sandylu Guerrero as a 2020 Latina of Influence. Ms. Guerrero along with our entire list of 2020 Latinas of Influence are invited to participate in Latina Conference taking place June 2, 2020 in Ontario, California.

Born and raised in Boyle Heights California in October of 1973. She is a Transformational Business & Life Coach, Author, Speaker and Influencer whom got most of her schooling through the school of hard knocks. Her journey to becoming a life coach started through her own self development transformational journey at the age of 36 in November 2009. Having experienced so much tragedy and loss in her life she found herself in a very dark place where she knew that she needed help. She had been carrying years of pain from being sexually abused as a child, living with an alcoholic mom who suffered from depression, a father who also struggled with depression, living in poverty, unhealthy relationships with men, the death of her brother due to a random freeway sniper shooting, being robbed at gunpoint, one divorce which became physically violent, a second marriage that ended in divorce due to her struggles with her low-self esteem and two miscarriages and the loss of her mother due to medical negligence.

Through her transformational journey she not only found her passion for helping others but she found her purpose. She spent the following years working hands on with her mentors, trainers and coaches to develop herself as a Coach.
In summer of 2012 she began her business, Life’s Choice Coaching, where she started coaching men and women one-on-one in supporting them with their personal and professional goals and dating and relationship goals. Soon after she created and facilitated a women’s coaching group called “Women’s Revival Group”. Since then she has been working with struggling couples and helping divorce’s become confidently single, created and facilitated various workshop on emotional intelligence and leadership for businesses and organizations. In April of 2016 she began producing her weekly Facebook Live Show “Transform Your Life with Sandylu & Friends.” In September 2016, Sandylu Co-Authored an Amazon Best Seller book called “Lead with Success.”

Sandylu served on the board of the National Latina Business Women Association Los Angeles. She also volunteers as a speaker in High Schools with the Youth Business Alliance Foundation. She has participated in panels, as a keynote speaker, spoke at conferences, hosted and lead events, podcasts, online summits and has also served as a moderator. Currently she is the official coach for the City of Commerce 2020 Pageant Participants.

Sandylu has chosen to use all her life’s experiences and training to make a positive difference in the world. She is committed to empowering as many people as she can through transparency, authenticity, her love for life and her love for all mankind. Her message to everyone is “Every Moment is a New Moment, an opportunity to create something different, something new, something extraordinary; You Have A Choice!