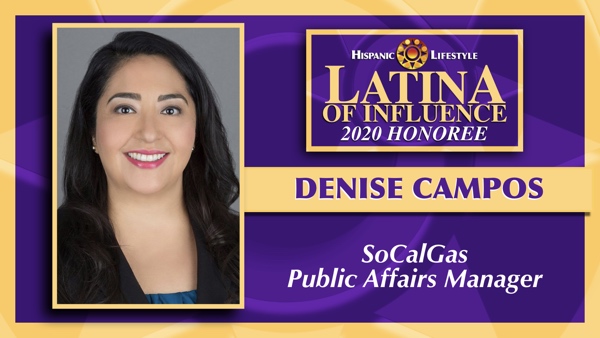 Hispanic Lifestyle is pleased to recognize SoCal Gas Public Affairs Manager Denise Campos as a 2020 Latina of Influence. Ms. Campos along with our entire list of 2020 Latinas of Influence are invited to participate in Latina Conference taking place April 1 and 2, 2020 in Ontario, California.

Denise Campos was raised in Los Angeles, attended local public schools. From a young age she was involved in her community, participating as a Girl Scout, and later volunteering throughout her high school years for numerous causes. Once at San Diego State University, she was elected to serve a representative in Associated Students government and followed her passion for community service through her involvement in student organizations that would provide food and supplies for orphanages in Tijuana.

Her career in the public sector started at the Los Angeles Commission for Children, Youth and Their Families, where she engaged young people to be part of the civic process. She also worked for several elected officials. In the Office of Los Angeles City Attorney Rocky Delgadillo, she organized community members around tenants’ rights, mentored young people by leading mock court trials, and translated gang injunctions so that residents would understand the impact of the law. In the Office of Los Angeles Councilmember Jose Huizar, she ran his Boyle Heights office, and oversaw many successful events including numerous holiday food and toy drives, community cleanups and more.

In her work with Los Angeles Unified School District Board Member Tamar Galatzan, she wrote policies that would save the district money in technology purchases and she authored a policy that would provide $99 million in funding for wireless access and oversaw the construction of millions of dollars of projects at schools in the San Fernando Valley.

As a SoCalGas Public Affairs Manager covering 13 cities in Los Angeles County, Denise has provided funding support to over 100 nonprofit and community organizations. She helped distribute hundreds of air filters to underserved communities and serves on the boards of numerous nonprofit and business organizations.

Campos was appointed to the California State Architect’s Board by Assembly Speaker Anthony Rendon and to the City of Los Angeles El Pueblo Historic Monument Authority Commission by Mayor Eric Garcetti. Campos is currently on the boards of the Los Angeles Trade-Tech College Foundation, Weingart East Los Angeles YMCA, and several Chamber of Commerce boards. Campos received bachelor’s degrees in Political Science and Mexican-American Studies from San Diego State University. Her parents immigrated to the United States from Mexico and she is the first in her family to graduate from college. Denise was invited to travel to Israel on a delegation with the American Israel Public Affairs Committee and has previously been recognized with the Angel Award from the East Los Angeles Community Youth Center.

We are submitting this nomination for Denise Campos for the Latinas of Influence 2020 award for all of her work and dedication to the Latina community. As you will see in her bio, Denise has spent her career working to provide resources to communities throughout southern California. Blending her corporate work with her volunteer work brilliantly, Denise has leveraged her expertise, relationships, and influence to uplift our communities.

From our local Los Angeles City Council office, to the LAUSD School Council office, and now with SoCalGas, Denise has continually put herself in roles where she could best serve hundreds of thousands of community members. Additionally, besides the work she does publicly, she also works “behind the scenes” to ensure that young Latinas get the support they need as they build their corporate and business careers.

Denise Campos would be an excellent recipient for the 2020 Latinas of Influence Award. We both highly recommend her.