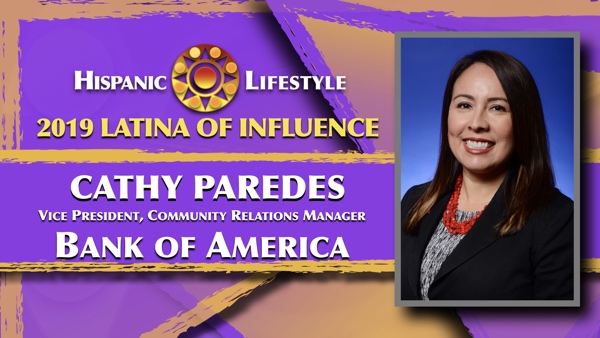 Hispanic Lifestyle is pleased to recognize Cathy Paredes Vice President, Community Relations Manager Bank of America as a 2019 Latina of Influence. Ms. Paredes along with our entire list of 2019 Latinas of Influence are invited to participate in Latina Conference 2019 taking place April 10 and 11, 2019 in Ontario, California.

Cathy has over 24 years in the financial services industry. Before joining Bank of America, Cathy was the vice president for Communications and Public Affairs at Merrill Lynch, where she managed and implemented Merrill Lynch’s California Partnership for Economic Achievement, a ten-year program designed to create economic opportunities in California’s diverse ethnic communities. She began her career in public affairs with the Los Angeles Federal Reserve Bank.

She advocates strongly for girls and young women in her community, serving on the boards of the Girl Scouts of San Gorgonio and the Women’s Leadership Council of Arrowhead United Way. She believes in the power of entrepreneurship, serving on the board of the San Bernardino Area Chamber of Commerce and having come from a family of immigrants who achieved their American dream through their small business. She knows first-hand how education can change a life, having been the first person in her family to graduate high school and then college, with a B.S degree in Business Administration from the University of Southern California. Cathy is a native to Los Angeles, and her family has resided in the Inland Empire for over 30 years.

Nomination submitted by Pam Montana
There are women in one’s life that not only influence but impact the lives of the people they surround themselves with. My friend Cathy plays three major roles: She is a professional, a volunteer, and a mom; the perfect trifecta. I have had the privilege of witnessing her in all three roles.

Cathy grew up in a rather large family. She knew from an early age the value of an education. She worked hard and soon found herself at the University of Southern California (USC) where she applied herself and ultimately walked away with a degree in business becoming the first in her family to graduate from college. Upon graduation, Cathy was soon hired at Bank of America and worked diligently in a male dominated industry and climbed the ladder of success becoming Vice President of one of the most prestigious and renown banks. In her role, Cathy interacts with business partners, community members, and a variety of professionals, but she never loses sight of her roots and the people (gente) she represents. She has paved the way for others to emulate and follow. She is the essence of a true leader.

In her spare time, she volunteers with the Girl Scouts and sits on several boards. I personally have seen her as a volunteer with Women United. Cathy is a founding member of this professional and philanthropic organization that helps young women in education, health, and financial stability. Cathy is always willing to present to the young women in Women United program on being fiscally responsible and also speaks from her personal experience. She is a strong advocate for the young ladies encouraging them to pursue their education and be strong independent young women.
Clearly Cathy plays a pivotal role as a professional and as a volunteer, but her most prized role is that of mom. Being a mom to her daughter, Cateleya is inspiring and makes parenting look effortless. The genuine affection between Cathy and Cateleya (la mama y su hija) is evident. They share an unbreakable bond. Cathy is a mom first and her priority is always her daughter. I can recall watching Cathy model for a fashion show fundraiser and I saw firsthand how Cateleya adoringly watched her mom walk the runway.

Who is a Latina of Influence? My friend, Cathy Paredes who can balance career, volunteerism, and motherhood. She is a woman who I admire and aspire to be. Cathy appears to have a modest demeanor, but she is also a Chingona Latina.