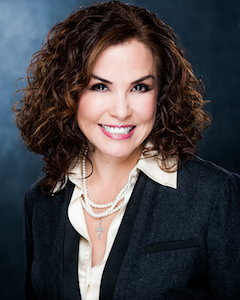 Hispanic Lifestyle is pleased to recognize New York Life Latino Market Manager and President of the Inland Empire Chapter of the National Latina Business Women’s Association Cecilia Herrera Bolbolian as a 2017 Latina of Influence. Ms. Bolbolian along with our entire list of 2017 Latinas of Influence are invited to participate in Hispanic Lifestyle’s 2017 Latina Conference taking place April 5 – 6, 2017 in Ontario, California.

Cecilia Herrera Bolbolian, born in Southern California, is a New York Life Latino Market Manager. She received an Associate of Arts Degree in Sociology from Mt. San Antonio College in Walnut, California, obtained a Bachelor of Business Degree from the University of Phoenix, and recently completed a Certificate Program by the University of Notre Dame in Board Development & Board Governance.

Early in her career, Cecilia worked at the Superior Court in Fullerton California full-time while attending college. She was the first in her family to graduate with a Bachelors degree. Always maintaining a strong work ethic, Cecilia’s persistence, commitment and potential drove her to utilize her Bachelor’s in Business degree and years of public relations experience into an Entrepreneur position. This allowed her to be able to raise her two children on her own with a flexible schedule, and be able to create a successful Real Estate career with her perseverance. She currently is licensed by the California Department of Real Estate, California Department of Insurance, and California Department of Secretary of State-Notary Public.

In 2008 she began to expand her career in the Financial Services. She recognized the need in the Latino community to address and educate Latino families and business owners on the importance in protecting their families in leaving a legacy instead of debt and struggles. She also found that many of our Small Business owners failed to save on taxes and save more towards their retirement. Her passion became to empower and educate the community. She is now a Corporate Latino Market Manager with New York Life Insurance and Investments, a company that focuses greatly in the Latino community.

Cecilia has an extensive record of civic involvement and accomplishments. She was recognized by Mayor of Pomona, Elliott Rothman, for her volunteer efforts and commitment to the Pomona Unified School District. She was also acknowledged by Congressman Mark Takano for the contributions to the Miracle on Main Street Toy drive. She served in the Go Red for Woman Executive Leadership Team and also on the Executive board of the Greater Riverside Hispanic Chamber of Commerce. She is currently on the Advisory Board for Parkview Community Hospital- Latino Council, VIP Latina Business Council Advisory Board, Argosy University Advisory Board, and President of the National Latina Businesswomen Association of the Inland Empire.

Cecilia has earned a reputation for being professional, committed, resourceful, and determined to helping others grow. Cecilia also volunteers for causes that are dear to her heart such as the Disabled Veterans. She is considered a well connected professional due to her passion to promote education and be a resource to others for personal or professional gain. She also thrives on helping clients and colleagues connect with one another.

Now, as President of the National Latina Businesswomen Association of the Inland Empire [NLBWA-IE], her main focus for 2015-2017 is to create Unity in Diversity and Prosperity in the Inland Empire. Through the NLBWA-IE she is promoting our Youth Initiative and supporting Small Business owners in their development by empowering them with education, training, and collaboration.