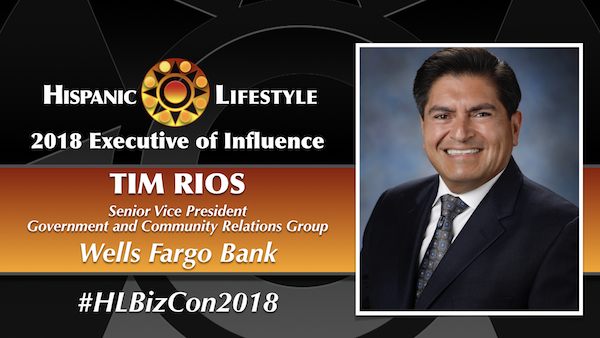 Hispanic Lifestyle is pleased to recognize Tim Rios Senior Vice President for Wells Fargo’s Government and Community Relations Group as 2018 Executive of Influence.  Mr. Rios will be recognized along with his follow honorees during Hispanic Lifestyle’s BizCon 2018 taking place on June 7, 2018 at the Ontario Airport Hotel and Conference Center.

Tim Rios is a Senior Vice President for Wells Fargo’s Government and Community Relations Group. He is responsible for implementing the company’s community and economic development programs in Northern and Central California, the Inland Empire and San Diego and Imperial counties.

Rios joined Wells Fargo in 1997 and during the course of his career he has held various positions in retail, wholesale and business banking. He contributes his leadership and advice to various organizations and serves on several boards, including the James Irvine Foundation.

Rios’ dedication to economic development has earned recognition from the California State Senate and Assembly. In 2005, Rios received national recognition from the U.S. Small Business Administration when he was presented with the “Financial Services Champion Award”. In 2007, Rios received the Young Hispanic Corporate Achiever award from the Hispanic Association on Corporate Responsibility. In 2010, Tim was a recipient of the “Grizzly Award” for Executive leadership under the Bank on California Program and was also re-appointed by Governor Schwarzenegger to California’s Economic Strategy Panel.

Tim attended California State University, Fresno, where he graduated with a degree in Finance. In 2006, he completed a three-year executive banking program at the University of Virginia. In 2013, CSU Fresno’s Craig School of Business recognized him with the Top Dog award, the highest honor bestowed on alumni.

Rios co-founded the Central Valley Latino Giving Circle – an effort dedicated to promoting strategic philanthropy among Latinos who wish to make a positive impact in the lives of underserved families. In 2017, this first-of-its-kind initiative provided more than $115,000 in grants to 13 non profit organizations.