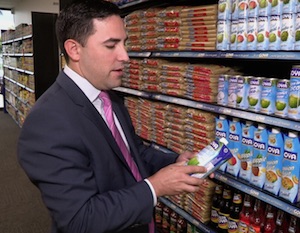 Goya Foods, Inc. is recognized by Hispanic Lifestyle as a company that has Survived and Thrived. Their efforts will be celebrated at our 2016 SoCal Business Expo and Conference on June 9, 2016 at the Ontario Airport Hotel & Conference Center.

Goya has fostered a longstanding history not only in the food industry, but also as a cultural symbol beginning in New York more than 78 years ago. The company’s commitment to excellence is the cornerstone of Goya’s popular credo, “If it’s Goya, it has to be good”. The result of this simple, yet deeply resonant pledge is the evolution of Goya Foods as a leader in the Latin American food industry and a trusted American brand.

The history and story of Goya is as much about the importance of family and values as it is about achieving the American dream and helping to cultivate the Latin culture in the United States. In 1936, Don Prudencio Unanue and his wife Carolina, immigrants who first migrated to Puerto Rico from Spain, started Goya in a small storefront on Duane Street in Lower Manhattan. Driven by the belief that there was a growing consumer market for high-quality, fresh-tasting, Latin foods, the Unanues catered to local Hispanic families by distributing authentic Spanish products including olives, olive oil and sardines.

As the Hispanic population grew in New York and throughout the United States, Goya’s product line and facilities expanded as well. The company relocated from Lower Manhattan to Brooklyn in 1958, until it established its current headquarters in Secaucus, New Jersey in 1974. In 2014, Goya announced a $250,000 million global expansion of four new state of the art manufacturing and distribution centers in Texas, California, Georgia and New Jersey to meet the consumer demands of healthy Goya products. In total, the company now boasts 16 facilities throughout the United States, Puerto Rico, Dominican Republic and Spain, employs over 4,000 worldwide, and produces and distributes over 2,200 products including condiments, pantry items, beverages, canned and frozen, as well as a vast assortment of low sodium, gluten-free, organic, and kosher foods.

Intent on preserving its rich cultural heritage, Goya celebrated its 75th anniversary in 2011, a milestone achievement that was recognized through a national, yearlong celebration while launching new company campaigns and initiatives. During Hispanic Heritage Month, President Barack Obama honored Goya for its continued success and commitment to the Hispanic community, the only company to ever be honored by The President. The following year, Goya collaborated with First Lady Michelle Obama and the USDA to launch MyPlate/ MiPlato campaign, a national health initiative to help educate Americans on how to eat healthy.

In addition, Goya Foods has been a proud supporter of programs, scholarships and activities that benefit families and children throughout the world. Each year, Goya actively engages with social, civic and local food banks on charitable endeavors that promote and sustain community wellness and the advancement of the Hispanic culture. The company has also taken the lead in numerous disaster relief efforts, providing food donations in times of crisis and consistently working with local charities and non-profits to assist those less fortunate. Over the years, Goya has donated millions of pounds of food to victims of various disasters and charities worldwide including Hurricane Sandy, Hurricane Isaac and Irene, the earthquake in Haiti, The United Way, Maestro Cares, and City Harvest.

Goya Foods remains firm in its goal of being the brand of choice for authentic Latin cuisine while retaining its family-oriented approach to its consumers and its roots in the culinary traditions of Hispanic communities throughout the world.