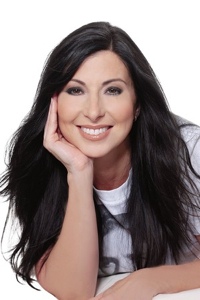 Tina Aldatz, Founder of Foot Petals has built a brand that has become a staple in the fashion world and valued by women worldwide.

It was an unfortunate childhood beach injury in 1978, when Tina suffered 3rd degree burns to the soles of her feet. This traumatic event would become a life determining moment and spark the idea behind a multi-million dollar brand.

After years of working in fashion for companies including: Victoria’s Secret and BCBG Max Azria, Tina was determined to develop a product that would help her learn to love her shoes again. In 2001, she created Foot Petals, the original designer insoles. Foot Petals can be found in the finest stores worldwide.

In 2011, Foot Petals celebrated its 10th anniversary and was acquired by RG Barry Corporation (DFZ).

Tina has been featured in Forbes as an “entrepreneur to watch” and Inc. 500 recognized Foot Petals as one of the “500 fastest growing companies in America”. Tina was also featured in OC Metro as “one of the 25 hottest people of Orange County”.

Tina currently is on the board of advisors for the “Left Shoe Company”.  She has also started her own investment company “TARRKE” and is Co-Chairing the Mentor Program for the Hispanic 100. She has been recognized as “2011’s NLBWA (National Latina Business Women Association) Business Woman of the Year”. Tina has also appeared on numerous television shows including: Good Day LA, CNBC and has been regularly featured as a live guest on HSN.

Tina is currently working on her new venture:  Writing a book “Stilettos

To The Stock Exchange.”  She is also doing a film about her life as an Entrepreneur.  She hopes this will enhance her career in public speaking, private consulting and pursing lifelong dreams of creating resources within the community.