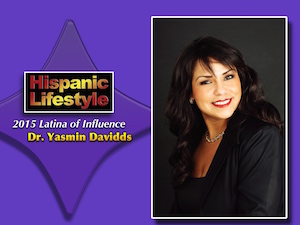 Dr. Yasmin Davidds is an Organizational Psychologist and the Founder and CEO of the Women’s Institute of Negotiation and the Latina Global Executive Leadership Institute. As one of only a few Latina negotiation experts in the U.S. and Latin America, Dr. Davidds has coached and counseled over 2,000 corporate leaders in over 200 blue chip companies throughout 22 countries. Dr. Davidds established the Women’s Institute of Negotiation (WIN), dedicated to the teaching, instruction and development of negotiating skills and leadership competencies primarily focused on women in professional, academic and corporate settings. Her commitment to the empowerment and development of women leaders has brought her recognition and acclaim from the U.S. Congress, the California State Senate and the California State Assembly.

Dr. Davidds is fluent in Spanish and works in-depth with organizations by coaching leaders who are tasked with leading stressful and rapid change. Training executives to more effectively integrate interpersonal skills into their leadership repertoire, she assists organizations from the top down as well as the bottom up. She has trained fortune 500 executives and facilitated their merging of different corporate cultures. Her training, facilitation and instructional design skills has assisted management in many large corporations, government agencies and professional associations.

A graduate of the University of Southern California (USC) with a degree in Business Entrepreneurship, Dr. Davidds went on to receive her Master’s Degree in Women Studies and her doctorate degree in Organizational Psychology. In 2013, she developed and launched the first Latina Global Executive Leadership Program in partnership with the USC Marshall School of Business.