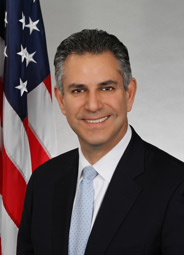 Under Secretary, Sánchez leads the International Trade Administration, an organization of 2400 employees with offices throughout the United States and  in 72 countries. Sánchez leads the efforts to improve the global business environment by helping U.S. businesses compete abroad.

As one of the architects of President Obama’s National Export Initiative (NEI), with the ambitious goal of doubling U.S. exports by the end of 2014, Sánchez directs programs and policies that promote and protect the competitiveness of American businesses. Under his leadership, working with partners in government, ITA has helped reach significant export milestones.  In 2011, U.S. exports reached a record $2.1 trillion in total value supporting nearly 10 million jobs, an increase of 1.2 million since 2009.

This interview was featured in episode hltv5183 of Hispanic Lifestyle