These Latinas Have Network HITS 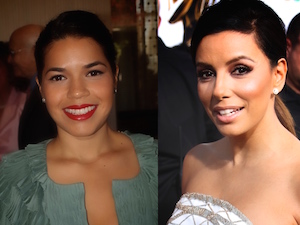 Yes these two new shows are fall off the couch funny and Hispanic Lifestyle recommends tuning into to NBC’s Superstore and Telenovela. Each of these shows features very talented Latina actresses America Ferrera and Eva Longoria. The half hour comedy shows broadcast on NBC, Monday nights at 8:00pm to 8:30pm respectfully. These shows can also be found online at NBC.com

From their website
SUPERSTORE
America Ferrera (“Ugly Betty”) and Ben Feldman (“Mad Men,” “A to Z”) star in a hilarious workplace comedy (from the producer of “The Office”) about a unique family of employees at a supersized megastore. From the bright-eyed newbies and the seen-it-all veterans to the clueless summer hires and the in-it-for-life managers, together they hilariously tackle the day-to-day grind of rabid bargain hunters, riot-causing sales and nap-worthy training sessions. The cast includes America Ferrera, Ben Feldman, Mark McKinney, Lauren Ash, Colton Dunn, Nichole Bloom and Nico Santos.

About America Ferrera
America Ferrera stars as Amy, Cloud 9’s intelligent and responsible floor supervisor on NBC’s new comedy “Superstore.” Ferrera also serves as a producer on the series. Ferrera is an award-winning actress and producer, perhaps best known for her breakthrough role as Betty Suarez on ABC’s hit comedy “Ugly Betty.” For her performance on the show, Ferrera was recognized with Golden Globe, Emmy and Screen Actors Guild Awards, as well as ALMA and Imagen Awards.

Ferrera recently wrapped production on Ricky Gervais’ satirical film, “Special Correspondents,” set to premiere on Netflix in 2016, opposite Gervais, Vera Farmiga and Eric Bana. Her recent film credits also include Ryan Piers Williams’ drama “X/Y,” which she produced and starred in opposite Amber Tamblyn. The film premiered at the 2014 Tribeca Film Festival.

Ferrera continues to lend her vocal talents to DreamWorks’ Oscar-nominated franchise “How to Train Your Dragon.”

Other film credits include police drama “End of Watch,” co-starring Jake Gyllenhaal, Anna Kendrick and Michael Peña; “It’s a Disaster,” alongside Julia Stiles and David Cross; popular YA titles “The Sisterhood of the Traveling Pants” (parts 1 and 2); the critically acclaimed biographical drama film “Lords of Dogtown,” directed by Catherine Hardwicke; as well as festival entries “The Dry Land” and “How the Garcia Girls Spent Their Summer.”

On stage, Ferrera starred in Terrence McNally’s off-Broadway production “Lips Together, Teeth Apart” in 2014. In 2013, she appeared as Crystal in Laura Marks’ off-Broadway play “Bethany” and in 2011 Ferrera starred as Roxie Hart in the West End production of the hit musical “Chicago” for an eight-week run. She also appeared off-Broadway in “Dog Sees God: Confessions of a Teenage Blockhead,” directed by Trip Cullman.

TELENOVELA
Eva Longoria (“Desperate Housewives”) stars on this big, fun and flashy half-hour comedy as Ana Sofia, the star of a popular Spanish language soap opera. One problem, she doesn’t speak any Spanish. Other problems? Ana must manage a new boss, jealous castmates and high-maintenance best friends – and that’s all before her ex-husband is hired as her new on-screen love interest. Just like a real telenovela, this comedy is full of all kinds of drama, including love, hate, life and even death! Despite all the chaos, this telenovela’s cast and crew is a family… or, at least, they try to be.

About Eva Longoria
Eva Longoria plays Ana Sofia Calderon and is an executive producer on the new NBC comedy “Telenovela.” Longoria is a Golden Globe-nominated, Screen Actors Guild- and ALMA Award-winning actress, producer, director, entrepreneur, philanthropist and “Desperate Housewives” alum. Her greatest work is as a champion of women, the Latino community and youth with special needs.

In addition to her foundation, Longoria co-founded Eva’s Heroes in 2006. Eva’s Heroes enriches the lives of those with intellectual special needs by providing an inclusive setting built on the four tenets of interact, grow, learn and love. Based in San Antonio, the organization helps teens and young adults with intellectual special needs to integrate into and flourish in society.