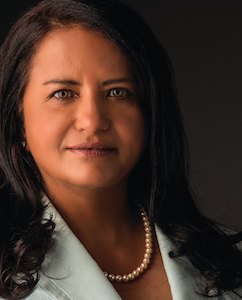 Hispanic Lifestyle recognized Alba Colon earlier this year as a 2017 Latina of Influence. Here is our exclusive interview with the Hispanic Heritage Foundation’s STEM Award honoree.

The Hispanic Heritage Foundation (HHF) announced today that Chevrolet Racing Program Manager for the Monster Energy NASCAR Cup Series, ALBA COLÓN will receive the STEM(Science, Technology, Engineering & Math) Award, sponsored by ExxonMobil, at the 30th Annual Hispanic Heritage Awards – set to take place September 14th at the historic Warner Theatre in Washington, D.C.  The Awards, which were created by the White House in 1987 to commemorate the establishment of Hispanic Heritage Month in America, are among the highest honors by Latinos for Latinos and supported by 40 national Hispanic-serving institutions that co-host the program.

The Hispanic Heritage Awards will include top Latino performers and personalities paying tribute to the Honorees from the stage, and will be broadcast nationally on Friday, October 6, 2017, (10:00 p.m. ET) on PBS. The Awards recognize the contributions and accomplishments of leading Latino individuals and organizations in various fields while celebrating cultural pride and the great promise to America. Alba Colon now joins already announced honorees Gael García Bernal and The Latin Recording Academy as part of the annual celebration, with additional honorees set to be announced in the coming weeks.

“As a Latina in a traditionally underrepresented field, Alba Colon is a transformative role-model for our community,” said José Antonio Tijerino, President and CEO of the Hispanic Heritage Foundation. “The Hispanic Heritage Foundation is privileged to honor her with the STEM Award on an evening which will be entertaining, meaningful and inspirational as we present America with the great value Latinos provide.  It’s more important than ever to showcase visionary Latinos like Alba and the other Honorees.”

Born Alba Lynnette Colón Rodriguez in 1968 in Salamanca, Spain, Alba moved with her family to Puerto Rico at the age of three. With a deep interest in math and science initially inspired by astronaut Sally Ride, Colon pursued an engineering degree at the University of Puerto Rico Mayagüez, and was later hired by General Motors as a data acquisition engineer.

In 2001, Colón began leading GM’s most visible racing program, as the Chevrolet Racing Program Manager for the NASCAR Cup Series – working with drivers such as Dale Earnhardt, Dale Earnhardt Jr, Jimmie Johnson, Tony Stewart and many more. Under her charge, Chevrolet has now amassed 285 race wins, 11 Driver’s Championships and 14 Manufacturers’ Cup awards to date – undeniably making Alba Colón one of the most powerful women in the sport today.