Tere A. Zubizarreta Inducted Into AAF Hall of Fame 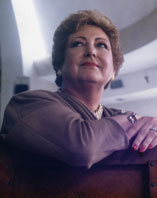 Hispanic marketing pioneer Tere A. Zubizarreta has been inducted into the American Advertising Federation’s Hall of Fame, receiving the industry’s highest recognition. She becomes the first Hispanic woman in the Hall of Fame’s roster. Over the course of 30 years, Zubizarreta became a major force in the development of the Hispanic advertising industry and a trendsetter who repeatedly broke down barriers.

Armed with fierce determination and the once unique vision that Hispanics would grow into a major force in the U.S., Tere established Zubi Advertising in 1976. She rented a small office with one phone and a borrowed typewriter, creating one of the first agencies to focus on the then-nascent U.S. Hispanic market. Along the way, her vision helped drive marketers to pay close attention to U.S. Latinos and forged a deeper understanding of this powerful consumer.

“It’s an incredible honor to have our mentor and mother recognized for her life’s work among so many industry icons,” read a joint statement from Joe Zubizarreta, Chief Operating Office of Zubi Advertising, and Michelle Zubizarreta, Chief Administrative Officer.  “Our objective is to uphold the values she instilled in us, but continually adapt and stay on the cutting edge of our time, as she did in hers.”

With that spirit in mind, the agency has been on an impressive run over the past few years, winning significant new business from clients such as JP Morgan Chase and Walgreens, and being named by Ad Age as an A-List Standout in early 2011 (one of 10 total firms across the country, and the only Hispanic-focused among them).   With headcount now approaching 140 people, the firm continues to win dozens of creative awards every year and attract the best talent to its Miami headquarters.

Founded in 1976 by Hispanic advertising pioneer Tere Zubizarreta, Zubi Advertising is one of the largest independent, privately-held and minority-owned advertising agencies in the country. Today it is the Hispanic agency of record for a number of prominent national blue chip companies that include: American Airlines, Ford Motor Company, Olive Garden, Chase, S.C. Johnson, The J.M. Smucker Company and Walgreens, among others. With over 30 years serving the U.S. Hispanic market and with offices in Miami, Detroit, Los Angeles and Dallas, Zubi Advertising had billings of $185 million in 2011