Spotlight | Patricia Rae in the “The Big Wedding” 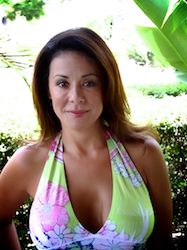 From the critically acclaimed, Oscar nominated feature film “Maria Full of Grace” to the highly anticipated Lions Gate comedy “The Big Wedding”, Patricia Rae continuously beams onto the big screen and into our hearts … one memorable role at a time.

How does Patricia, have elite actors Robert DeNiro, Diane Keaton, Susan Sarandon, Katherine Heigl, Amanda Seyfried, Topher Grace, Ben Barnes and Robin Williams wrapped around her fingers? Catholism. These Hollywood Big Guns go out of their way to, conspire an intricate master plot: to lie to “Madonna” Patricia Rae, that is. That, in a nutshell is the premise of “The Big Wedding”, with Rae in a pivotal, meaty role, whose character gives the entire story its main conflict and principal plot twist.

Anticipated to be the biggest blockbuster movie this fall, “The Big Wedding” hits movie theaters nationwide on October 26, 2012. The feature film written and directed by Justin Zackham (writer of “The Bucket List), co-produced by Zackham’s Two Ton Films and Millennium Films, snagged foreign and domestic distribution via Lions Gate.

This rom- com centers around Don (Robert De Niro) and Ellie (Diane Keaton), a long divorced couple, who pretend to still be happily married, for the sake of their adopted son’s (Ben Barnes) wedding, and his conservative biological (Colombian) mother Madonna Sotto (Patricia Rae). The hoax snowballs into a raucously funny, yet poignant story about the ties that bind, as they all quickly learn that acting the part isn’t as easy as it used to be.

A spitfire Latina from Queens, New York, raised in a strict Catholic household Patricia Rae has found her niche working as a successful character actor with roles running the gamut of genres, infusing her roles with spirituality, and humor.

Rae honed her skills on the East coast, but after years spent building her resume, it was time to test the LA shores. On a quest for that “breakthrough” role, she landed the role of a lifetime in “Maria Full of Grace”, which ironically sent her back to the same streets of Queens– where it all began.

Rae’s portrayal of Carla, a Colombian immigrant struggling to raise her family in New York, struck a chord with audiences alike.

Delivering the most memorable moments of the film, she infuses the character with subtle Grace, cementing her performance in cinematic history. A performance, which earned her a litany of accolades, including the prestigious Imagen Awards nomination for “Best Supporting Actress.”