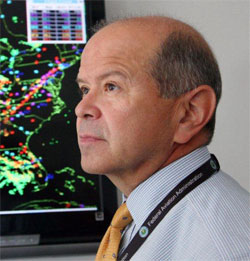 UC Riverside alumnus Michael P. Huerta has been confirmed by the U.S. Senate to serve as chief of the Federal Aviation Administration for a five-year term. Nominated by President Barack Obama in March 2012, the Senate confirmed his appointment as the FAA administrator on Jan. 1, 2013. He was sworn in on Jan. 9.

“As deputy administrator and as acting administrator, Michael has managed a number of challenges over the past couple of years with tenacity, skill, and diplomacy. And as its new leader,

I know he will ensure an even stronger future for the FAA and everyone who flies in our nation’s skies,”
Transportation Secretary Ray LaHood said in a prepared statement.

The FAA is an agency of the U.S. Department of Transportation and regulates all aspects of civil aviation in the country, including air-traffic control, promotion of civil aviation safety, and encouragement of new aviation technology.

Huerta holds a bachelor’s degree in political science from the University of California, Riverside and a master’s in international relations from the Woodrow Wilson School of Public and International Affairs at Princeton University.

He was named acting administrator of the FAA in December 2011. He is responsible for the safety and efficiency of the largest aerospace system in the world, overseeing a budget of nearly $16 billion and more than 47,000 employees.

Huerta is an experienced transportation official who has held key positions across the country, including service as deputy administrator of the FAA from 2010 to 2011. Before joining the FAA, he held senior positions at Affiliated Computer Services from 2002-2009, including president of the Transportation Solutions Group; ACS is now a Xerox company specializing in business processes and information technology.

He also served as managing director of the 2002 Olympic Winter Games in Salt Lake City, Utah, and was commissioner of New York City’s Department of Ports, International Trade and Commerce from 1986 to 1989, then as the executive director of the Port of San Francisco from 1989 to 1993. From 1993 to 1998, he held senior positions in the U.S. Transportation Department in Washington, D.C., serving under Secretary Federico Pena and Secretary Rodney E. Slater.

Huerta grew up in the Riverside area and attended Notre Dame High School in Riverside before graduating from UC Riverside.