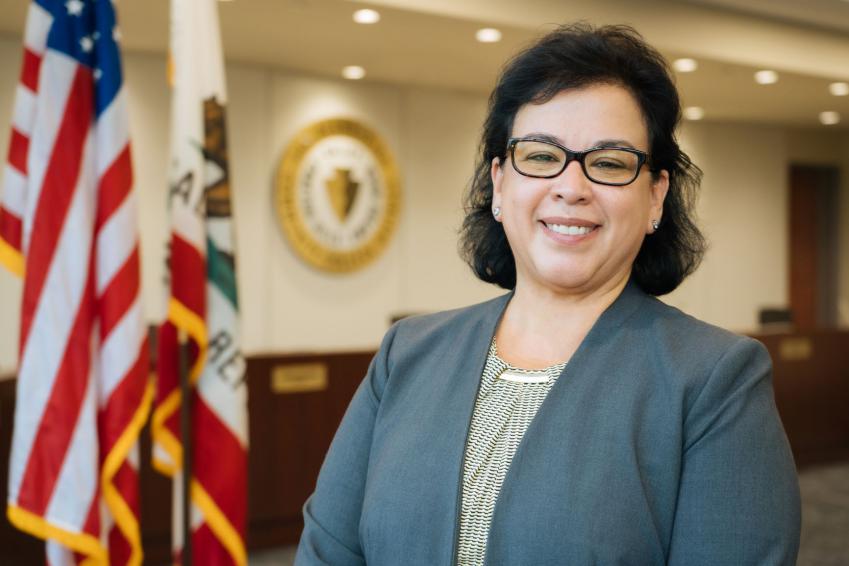 “Serving as the next chancellor is the honor of a lifetime,” Rodriguez said of her new role.

Rodriguez will lead the mission of a system that serves 20,000 students through Crafton Hills College, San Bernardino Valley College, a workforce training facility, and KVCR TV/FM. Rodriguez is poised to become the only Latina chancellor of a community college district in Southern California upon assuming office in August.

She will assume her new duties as Chancellor of the San Bernardino Community College District on August 1, when campuses return to expanded in-person learning and working. The current interim Chancellor, Jose F. Torres, will return to his position as the Executive Vice Chancellor for the district.

On June 2, the district will have a virtual meet and greet with Chancellor-designate Rodriguez open to the community and streamed on the district’s social media channels.

As the chief executive officer, Rodriguez will manage a budget of $200 million and 1,000 faculty and staff members. She is known for increasing student enrollment, advocating for institutional innovation, and supporting professional development.

“Serving as the next chancellor is the honor of a lifetime,” Rodriguez said of her new role. “My passion for this work comes from my own story. As I walk across our district and our campuses, I see myself in our students. I am second-generation Mexican-American, first in my family to go to college, and a very proud community college graduate,” she said.

Rodriguez graduated from Palo Verde College, earned three degrees from California State University, San Bernardino in marketing, a master’s degree in business administration, and another master’s degree in education. She is a doctoral candidate in Higher Educational Leadership at Northcentral University.

Dr. Anne Viricel, chair of the SBCCD Board of Trustees, said the decision to hire Rodriguez will shape the district’s future, which is one of the area’s largest employers and an economic engine for the Inland area.

“We have seen her excellence at San Bernardino Valley College, and she has proven herself the right leader at the right time,” Viricel said. She said Rodriguez, who has led SBVC since 2016, has experience at two-year and four-year institutions, from classified staff to a faculty member to administrative leader.

The board conducted a national search, asking the top finalists to create a vision for the college district and explain their leadership philosophy.

Rodriguez worked with K-12 schools and community partners to start student-focused programs such as the GenerationGo! internship program, the Valley360 Resource Center food pantry, the Workforce Readiness Program, and the annual SBVC Day of Service.

In leadership, Rodriguez describes her philosophy as planning the strategy, measuring success, and advocating for the needed resources.

“I’m kind of geeky, so I like this stuff,” she said after talking about the metrics of success, including educational strategies faculty and staff spearheaded to earn SBVC the highest level of accreditation this year from the Accrediting Commission for Community and Junior Colleges.

“I’m continuously mapping our documents and the progress we’re making on each of them,” Rodriguez said. “But let’s think about it this way. What if we dream big. Let’s shout our dreams big about who we want to be and how we want to get there.”

She said the immediate goal is to return from the pandemic in a safe, steady, and sustainable way. She wants to expand campus offerings so that students and faculty continue to have choices about in-person or online learning. The district is approaching a celebration of 100 years since its founding in 1926, and she said she looked forward to involving the community and industry partners in planning the success of the next decade.

Her accomplishments have drawn several awards, including the 2018 Woman of the Year Award for the 47th Assembly District of California.

END_OF_DOCUMENT_TOKEN_TO_BE_REPLACED

KEY FACTS ABOUT THE CALIFORNIA RECALL

Secretary of State Shirley Nash Weber explained the nuts and bolts of the Sept. 14 election that will decide whether or not the Democratic governor ends his term.  By: Jenny Manrique, Ethnic Media Serviees"It is probably the most important election that we will see in...