Rita Moreno to be Honored with 2013 SAG Life Achievement Award 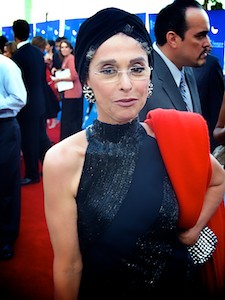 Groundbreaking actor, singer, dancer, author and educator Rita Moreno has been named the 50th recipient of SAG-AFTRA’s highest tribute – the SAG Life Achievement Award for career achievement and humanitarian accomplishment. Given annually to an actor who fosters the “finest ideals of the acting profession,” the SAG Life Achievement Award will join Moreno’s rare catalog of preeminent industry and public honors, which also includes an Oscar®, two Emmys®, a Tony®, a Grammy®, the Presidential Medal of Freedom and the National Medal of the Arts. Moreno will be presented the performers union’s top accolade at the 20th Annual Screen Actors Guild Awards®, which will be simulcast live on TNT and TBS on Saturday, Jan. 18, 2014, at 8 p.m. (ET), 7 p.m. (CT), 6 p.m. (MT) and 5 p.m. (PT).Ken Howard, SAG-AFTRA Co-President said,

“I am simply delighted that Rita Moreno is the 50th recipient of our SAG Life Achievement Award – the most prestigious honor we bestow. She is an extraordinarily versatile, talented and generous actor whose career is notable for its courageous choices and for the breadth, depth and quality of her many demanding and commanding roles. She is a magnificent actor, and I am honored to join all SAG-AFTRA members in recognizing the incomparable Rita Moreno.”

Roberta Reardon, SAG-AFTRA Co-President said, “No one is more deserving of this honor than the fabulous and accomplished Rita Moreno, an iconic talent whose excellent work includes hit movies, highly-rated television series, landmark public television programs and award-winning recordings. She is emblematic of the broad reach and diverse coverage of our new, merged union. She is an inspiration in every effort, but never more so than with her civil rights activism, promoting equality and diversity while ushering in a more representative depiction of the American scene on screen.”

At 81, Rita Moreno continues to embody the creative diversity that has been the hallmark of her nearly 70-year career. One of only 11 artists and the only Hispanic performer to have won the entertainment industry’s four top competitive awards, she earned her Oscar in 1962 for her iconic portrayal of saucy Anita in West Side Story, a role which drew on memories of the racial taunts she endured as a young Puerto Rican immigrant living in a Bronx “barrio.” Her 1972 Grammy honored her performance on The Electric Company Album, based on the long-running PBS children’s literacy television series on which Moreno played multiple roles in a memorable cast that included Bill Cosby and Morgan Freeman. The Tony came for her 1975 satiric turn as flamboyant, talentless Puerto Rican bathhouse singer Googie Gomez in Broadway’s The Ritz. A six-time Emmy nominee, she won her first of the Television Academy’s honors in 1977 for one of her many guest appearances on The Muppet Show. The following year, she earned a second Emmy for her dramatic guest performance on The Rockford Files.

Over the decades, Moreno has collected dozens of other show business honors, including a star on the Hollywood Walk of Fame in 1995. A favorite of Chicago audiences and critics, she received that city’s coveted Joseph Jefferson Award in 1968 as Serafina in The Rose Tattoo and in 1985 was awarded the prestigious Sara Siddons Award for her comic portrayal of Olive Madison in the female version of The Odd Couple. In 1998 she received the first of two National Council of La Raza ALMA awards for her role as Sister Peter Marie Reimondo in the gritty HBO prison drama Oz, as well as the organization’s Lifetime Achievement Award.

Moreno was born Rosita Dolores Alverio in Humacao, a small town near the El Yunque rain forest in Puerto Rico. She lived in nearby Juncos until age 5, when her mother Rosa Maria, a seamstress, moved with her to live with relatives in New York City. Her exuberant dancing around their crowded apartment led to dance lessons with Spanish dance master Paco Cansino, an uncle of Rita Hayworth. While still a child, the young Rosita entertained departing troops with the USO, performed in radio plays and dubbed English-language films in to Spanish.

Moreno made her Broadway debut at just 13 in Skydrift, starring Eli Wallach. After making her film debut under the name Rosita Moreno in the 1950 independent reform school drama So Young So Bad, a talent scout arranged for her to meet MGM mogul Louis B. Mayer. With her mother’s help with wardrobe and make-up, Moreno aptly transformed herself into what Mayer saw as a “Spanish Elizabeth Taylor.” He immediately signed the teen to a contract.

Moreno’s Hollywood career advanced steadily, with early films co-starring such actors as Richard Widmark, Esther Williams, Mario Lanza, Susan Hayward, Tyrone Power and Gary Cooper. She appeared as silent screen vamp Zelda Zanders in the now legendary musical Singin’ in the Rain, starring Gene Kelly. A 1954 photo shoot that was supposed to focus on a TV series pilot starring Ray Bolger instead landed Moreno on the cover of LIFE Magazine, with the provocative headline “Rita Moreno: An Actress’s Catalog of Sex and Innocence.” It drew the attention of 20th Century Fox head Darryl F. Zanuck, who signed her to her second studio contract.

At Fox, Moreno was featured as the tragic Tuptim in the classic The King and I, with Yul Brynner and Deborah Kerr. For the film, she spoke with what she had come to call her “universal ethnic accent”. The King and I marked Moreno’s first film with choreographer Jerome Robbins, who later cast her in West Side Story.

Other significant film appearances include The Night of the Following Day, with Marlon Brando; Marlowe, with James Garner; Popi, in which she played Alan Arkin’s girlfriend; and in Mike Nichol’s production of Carnal Knowledge. She reprised the role of Googie Gomez in the film version of The Ritz, followed by Alan Alda’s The Four Seasons, the award-winning independent film I Like it Like That and the comedy-drama Angus, with George C. Scott and Kathy Bates. She starred opposite Ben Gazzara in Blue Moon and as an Italian widow in the indie feature Carlo’s Wake, with Christopher Meloni. She also appeared in the highly acclaimed movie Pinero, starring Benjamin Bratt, and in John Sayles’ Casa de los Babys. Still one of industry’s busiest stars, Moreno will next be seen in the film version of Six Dance Lessons in Six Weeks.

Moreno’s long stage career has included starring roles on both sides of the Atlantic. In London, she appeared in Hal Prince’s 1962 production of She Loves Me and in the 1997 West End run of Sunset Boulevard. In New York, she has starred in Lorraine Hansbury’s The Sign in Sidney Brustein’s Window, opposite Robert Shaw in Gantry and with Jimmy Coco in The Last of the Red Hot Lovers. She received a Tony Award nomination for her role in The National Health in 1974, followed by her 1975 Tony win for The Ritz. Other New York credits include Anne Meara’s After Play; Wally’s Café, with Jimmy Coco; Circle Rep’s Size of the World; and, more recently, the female version of Neil Simon’s The Odd Couple.

Although her early film roles sometimes found her typecast as a Mexican spitfire or Indian maiden, Moreno has since broken the Latina mold many times. Her diverse regional theatre roles include Lola in Damn Yankees, Annie Sullivan in The Miracle Worker, Doris in The Owl and the Pussycat, the proper Englishwoman Charlotte in The Magistrate and Mama Rose in Gypsy. At Berkeley Repertory Theatre, she received rave reviews for her interpretation of Maria Callas in Terrence McNally’s play Master Class in 2004. Two seasons later, she received similar acclaim for her portrayal of Southern belle Amanda Wingfield in Berkeley Rep’s production of The Glass Menagerie. And last fall, she returned to the Berkeley stage for the premiere of her autobiographical play, Life Without Make-up.

Moreno’s current role as Fran Drescher’s mother in TV Land’s Happily Divorced, is the latest in a long roster of television performances dating back to a panoply of television anthologies in the early 1950s and continuing throughout her career with numerous guest roles between films and stage appearances. In 1982-83, she starred in her own TV series based on the film 9 to 5. Additionally, she played opposite Burt Reynolds in B.L. Stryker and was a series regular with Bill Cosby on NBC’s The Cosby Mysteries. And in 2007, she starred in the CBS series Cane.

Moreno performs concerts across the country, often appearing as a guest artist with symphony orchestras, as well as in more intimate cabaret settings. In January 1993, she was invited to perform at President Clinton’s inauguration and later that month sang at the White House. In 2002, she appeared as the guest artist with the San Francisco Symphony in a production of Candide. On Jan. 20, 2013, she joined Chita Rivera, Eva Longoria, Jose Feliciano, Raul Esparza and many others in headlining In Performance at the Kennedy Center, an event honoring Barack Obama’s second Presidential inauguration and Latino arts and culture.

In addition to film, stage, television and concert commitments, Moreno fills her spare time by lecturing to various organizations and university audiences. She speaks on such varied topics as The Value of Diversity to our Culture, The Power of Language, Getting Older Without Getting Old and A History of the Arts in Film TV & Theatre.

After her Oscar® win, Moreno came to realize that being a public figure could give voice to important causes. She was among the Hollywood luminaries mobilized by Harry Belafonte to take part in the historic March on Washington on August 28, 1963. She has since been involved with many civic, cultural and charitable organizations and events supporting such important causes as racial equality, hunger, early childhood education, higher education for minority students through such organizations as The Jackie Robinson Foundation and health issues like HIV/AIDS, breast cancer, heart disease and diabetes. Her longtime interest in fitness led to her producing the 1992 exercise video Rita Moreno: Now You Can! Fit and Fabulous Forever.

At a White House ceremony in June 2004, Moreno was awarded The Presidential Medal of Freedom by President George W. Bush. The medal is the highest honor bestowed upon a civilian and ranks only second to The Congressional Medal of Honor as the nation’s highest award. It is conferred on individuals for a lifetime of meritorious service.

In 2007, Moreno was inducted into the California Hall of Fame by Governor Arnold Schwarzenegger. In 2010, she was awarded The National Medal of Arts by President Barack Obama as well as the Here I Stand Award for activism in the arts and the HOLA Lifetime Achievement Award. In June 2013 she was inducted into the Great American Songbook Hall of Fame in Indianapolis, where she was honored along with Liza Minnelli, Frank Sinatra and Jimmy Webb.

Moreno’s autobiography, Rita Moreno: A Memoir, was published in March 2013 and instantly became a New York Times bestseller. An edition in her first language, Spanish, will be published in August.