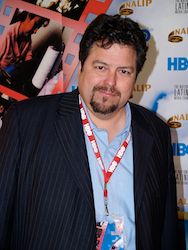 On March 3rd, Najera was critically injured in an accident and suffered head trauma that left him two weeks in the ICU. With the generous outpouring of love and support from family, friends in the industry and the community, Najera’s recovery was nothing short of a miracle. Even his doctors were surprised, especially as his humor began to emerge from the ICU.

To give thanks and to celebrate all of our “familia” in the industry, friends of Rick Najera cordially invite you to experience a special evening of comedy as we celebrate a second chance for Rick Najera and a chance to celebrate our community through comedy, the best medicine of all.

With an extensive career in Hollywood, Najera has worked inall forms of entertainment in both the English and Spanish markets. “I wanted to put together a show to celebrate and thank those who have prayed for me,”said Najera.  “It’s going to be a great show.”

Rick Najera & the ICU (Intensive Comedy Unit) Comedy Benefit will be held Friday, May 18 at 8:00 pm at The Ricardo Montalbán Theatre, 1615 Vine Street  Los Angeles,CA 90028.  The show is produced by Rafael Agustin and Juan Rafael Hernández, with the support of the MontalbanFoundation. Tickets are available for $30 pre sales or $35 at the door and can bepurchased atTix.com under “Rick Najera & the ICU.”