Report Women and the Economy 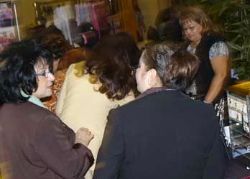 White House Releases Report on Women and the Economy

Today, at the White House Forum on Women and the Economy, the President will discuss the importance of restoring the economic security for the middle class and creating an economy that’s built to last for America’s women. The President believes we must build an economy where everyone gets a fair shot, everyone pays their fair share, and everyone plays by the same set of rules. As part of today’s Forum the White House released a new report entitled Keeping America’s Women Moving Forward, The Key to an Economy Built to Last, which examines the ways in which the Administration has worked to ensure women’s economic security through all stages of life – from young women furthering their education and beginning their careers, to working women who create jobs and provide for their families, to seniors in retirement or getting ready for retirement. View the report HERE.

“As a father, one of the highlights of my day is asking my daughters about theirs.  Their hopes and their futures are what drive me every day I step into the Oval Office,” said President Obama.  “Every decision I make is all about making sure they and all our daughters and all our sons grow up in a country that gives them the chance to be anything they set their minds to; a country where more doors are open to them than were ever open to us.”

Today, more than ever, women are essential breadwinners in most American families. Yet women in our economy and our work force still aren’t getting a fair shake, earning just 77 cents on every dollar paid to men.  Women now make up nearly 50% of our workforce, are a growing number of breadwinners in their families, and are the majority of students in our colleges and graduate schools. The President believes that expanding economic opportunities for women and ending discriminatory practices is critical to building an economy that restores security for middle class families, where hard work and responsibility are rewarded, and everyone who wants one can find a good job.

Highlights from the Keeping America’s Women Moving Forward report include an overview of how Administration policies impact women at every stage of their lives:

Of the additional 3.4 million students who have received Pell grants since the President took office, approximately 2.3 million are women.

9.4 million students and families have benefitted from the American Opportunity Tax Credit to help pay for college.

Women and girls across America are benefiting from efforts to promote Science, Technology, Engineering, and Math, (STEM) degrees and careers because women who hold STEM degrees and jobs earn 30% more, on average, than women in non-STEM jobs.

Working Women Providing for their Families and Contributing to Economic Growth

$62.5 million in monetary relief has been obtained for victims of sex-based wage discrimination by the Equal Employment Opportunity Commission since January 2010.

The Payroll tax cut provided an average of $1,000 of tax relief for nearly 75 million women.

An estimated 4.9 million women were kept out of poverty in 2010 because of expansions in refundable tax credits such as the Earned Income Tax Credit and Child Tax Credit.

An estimated 20.4 million women are benefiting from expanded access to preventive services such as mammograms, breast and cervical cancer screenings, and prenatal care at no additional cost.

Senior Women in Retirement and Preparing for Retirement

24.7 million women enrolled in Medicare received preventive services at no additional cost in 2011, including an annual wellness visit, a personalized prevention plan, mammograms, and bone mass measurement for women at risk of osteoporosis.

More than 2 million women enrolled in Medicare who hit the donut hole saved $1.2 billion in 2011 due to improvements in prescription drug coverage.

More than $13.6 billion in payments of $250 each were provided to seniors and veterans as part of the Recovery Act, a substantial percentage of which went to women.

The White House Women and the Economy Forum will address a wide range of Administration accomplishments while focusing on how critical women are to the nation’s economic success. Chair of the White House Council on Women and Girls Valerie Jarrett will deliver opening remarks and introduce a panel, moderated by Mika Brzezinski of MSNBC’s Morning Joe with Senior Administration Officials, private sector and academic leaders participating. Following the opening panel, the President will deliver remarks to an audience of entrepreneurs, academics, stakeholders, business leaders.  Following the President’s remarks, Senior Administration Officials including Secretary of Health and Human Services Kathleen Sebelius, Secretary of Labor Hilda Solis, Attorney General Eric Holder, as well as the Director of the Domestic Policy Council Cecilia Munoz, Executive Director of the White House Council on Women and Girls Tina Tchen and Katharine Abraham, Member of the Council of Economic Advisors,  will lead a series of breakout sessions on a range of topics including: Women at Work, Education, Health, Women’s Entrepreneurship, and Violence Against Women and Girls.

View more about the White House Council on Women and Girls HERE.